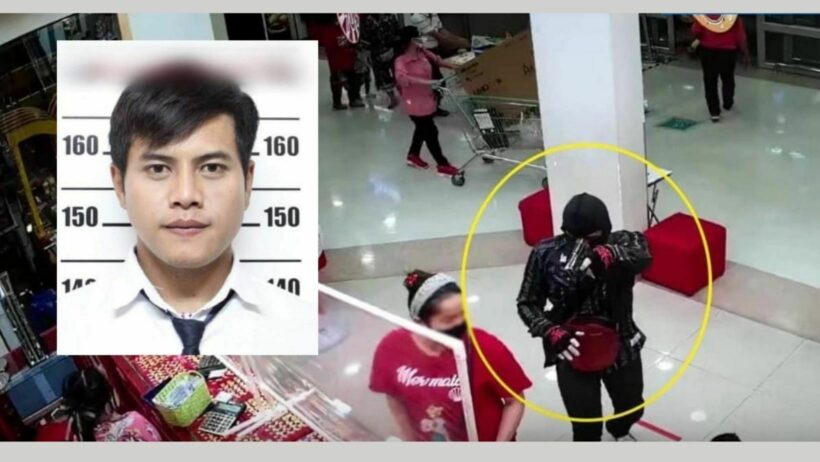 A gold robber, 28 year old Kittipong Phaethaisong, has been caught in Pattaya today, April 15, in a hotel after stealing gold necklaces valued at about 4.5 million baht in Nakhon Ratchasima, northeastern Thailand earlier this week.

He told police the motivation for the crime was that he was unemployed and short on cash. The police have already found several of the stolen gold necklaces as the search continues for the rest.

The incident took place in Nakhon Ratchasima, also known as Korat, at a Lotus supermarket. It took only 20 seconds for him to steal 51 gold necklaces, around 3-baht (in weight), valued at around 4.5 million baht.

Security cameras inside Lotus and CCTV cameras installed along the roads where he escaped on a motorbike without a license plate, helped the police to follow him to Pattaya.

Police have not reported why he tried to escape to Pattaya.

Soidog
I’ll say one thing for the RTP, they get their man quickly. Sometimes even if they are not the guilty ones.

palooka
1 hour ago, Soidog said: I’ll say one thing for the RTP, they get their man quickly. Sometimes even if they are not the guilty ones. Think the gold shops pay good tea money.
Fanta
I’m surprised they didn’t catch him at his mother’s house. That’s where these “professional”’criminals normally hide out.

Soidog
2 hours ago, palooka said: Think the gold shops pay good tea money. Well that and the fact that catching a guy with a bag full of gold necklaces, means there’s every opportunity for some to go missing. 🤔🤔

Argument between Bangkok ‘Win’ drivers ends in a fatal shooting