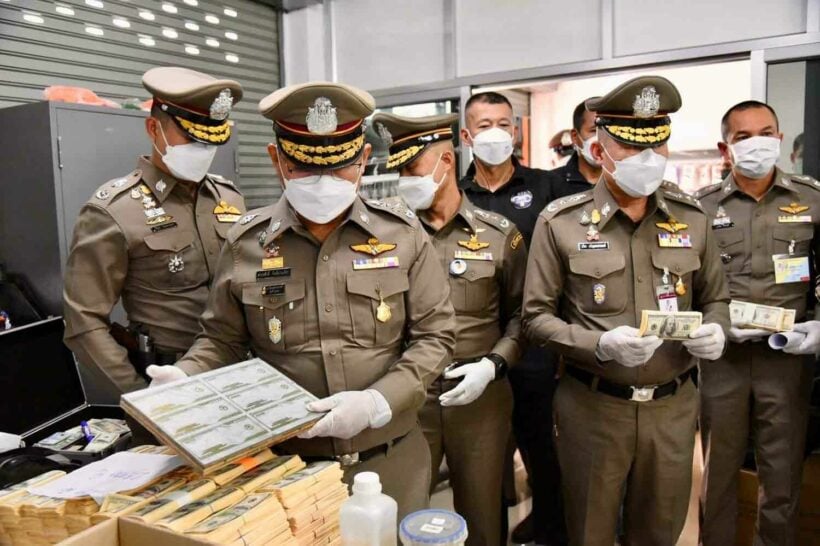 A police raid led to uncovering an alleged counterfeiting ring that is suspected of producing 50,000 fake American banknotes in the Bangkok suburb of Nakhon Pathom. The criminal masterminds were discovered by police as they attempted the move the counterfeit bills in a not so sneaky way: advertising them for sale on Facebook.

Police opened an investigation on the operation after seeing an announcement on a Facebook page offering fake American bills for sale. The investigation led to a police raid yesterday, with officers from the Metropolitan Police Bureau joined by the Technology Crime Suppression Division converged on a house in Bang Len district of Nakhon Pathom.

They also implicated a fourth woman who they said was the actual counterfeiter. That woman was also tracked down and arrested. Police are still searching for other possible accomplices in the counterfeiting gang.

Two of the women said that they were recruited by a third woman to sell the banknotes, which that woman apparently confirmed while telling police it was the fourth woman that actually manufactured the bills. They claim that this was their first foray into the counterfeiting business.

Malc-Thai
Amazing.. from sheer brilliance of setting up and counterfeiting $100 bills to sheer stupidity of selling them on Facebook! Anyone want a $100 for only ฿1000 ! 🤦

Poolie
They might as well. Monopoly money, printed at will!
Jason
There are a number of people who have embarked on a life of crime, who really need to just admit that they are "not the sharpest tool in the shed". Give it up, you guys...you're hopeless at it...and the police…