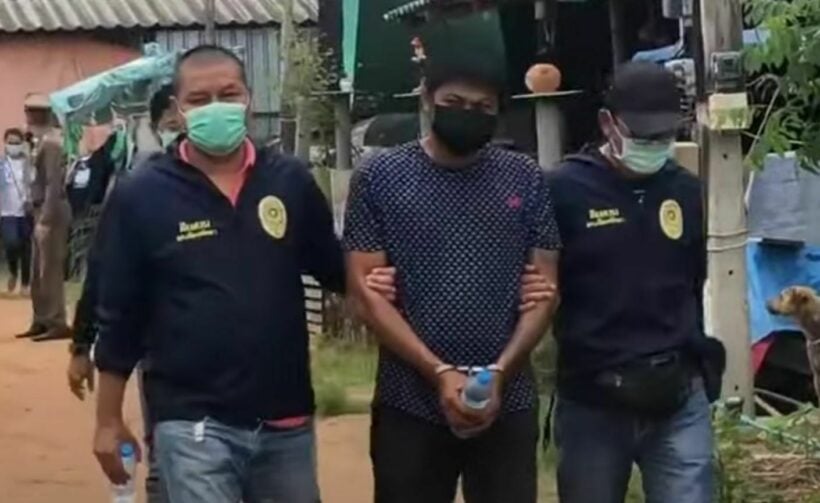 PHOTO: Fake police held a woman in a dog kennel to extort 50,000 baht. (via video screenshot)

A woman went out for a shopping trip but ended up at the centre of a bizarre story after she alleges she was arrested by fake police and detained in a dog kennel while being extorted for 50,000 baht. The woman was reported missing on Monday by her mother after she never came home from her shopping trip and today police arrested 4 men and charged them with impersonating police officers.

The Pattaya City Police raided their compound at a farmer chicken fighting facility with 3 pit bulls on-site and a number of dog kennels. The unnamed woman said that the men posing as police took her into custody and put a black bag over her head while driving her to the location full of chickens and dogs. Though it was not revealed what crime the fake police officers had accused her of, she said that they held her in a dog kennel and told her that she would be released for 50,000 baht.

The men impersonating police officers told her that if they brought her to the actual police station the penalty for her crimes would be much harsher and much more expensive. The next day, the victim attempted to get the money from her foreign boyfriend but was only able to get 16,000 baht. The men holding her hostage agreed to let her go for that price.

Today Pattaya and Chon Buri police went to the chicken fighting venue in Bang Lamung That they identified as the location the woman said that she had been held along with several other captives. During the course of their investigation, police uncovered 2 additional victims of the group, one of whom actually identified the fourth member of the gang that had been arrested after the original report only identified 3 men.

Further investigation revealed that one suspect is a former Thai Navy officer and police suspect that there are more perpetrators impersonating police officers as part of this gang. Police also believe that there may be many more victims of the fake officers. The Pattaya Police ask anyone who believes they’ve been targeted by the gang to file a report at the police station.

thai3
At least no plastic bags tied round her head with a 2 million baht demand to be let off!
Graham
Ah the land of extortion and corruption, everyone knows it but nobody does anything about it.  TIT.

DoUKnowWhoIAm
"The men impersonating police officers told her that if they brought her to the actual police station the penalty for her crimes would be much harsher and much more expensive."    So the new Police was cheaper... no wonder the…