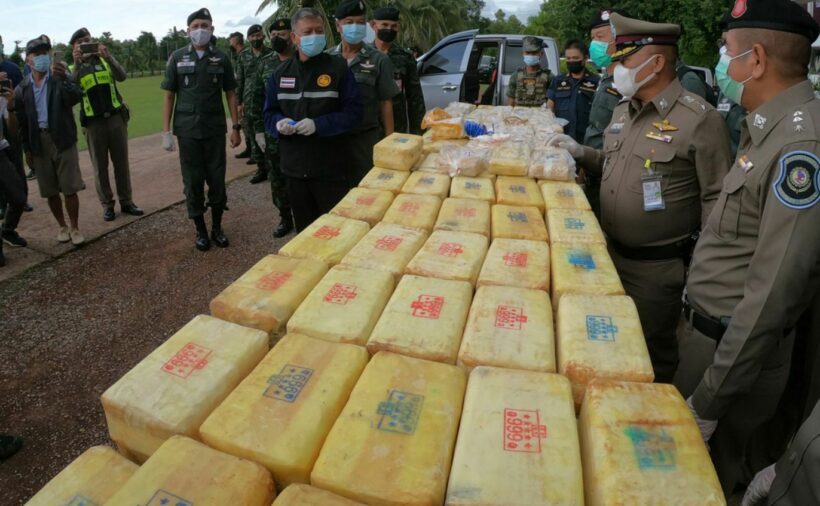 If you like your spicy papaya salad with a little extra kick, a som tam vendor in Nakhon Phanom was arrested today with 4.6 million speed pills. The woman was apprehended when border patrol police in Tambon Saenphan searched her pickup truck and discovered 10 big fertiliser bags holding 4,622,000 speed pills.

The woman told police she earned her money making and selling som tam and supplemented her income doing day labour. But her side hustle transporting illicit drugs was far more profitable. She was working to provide for her 14 year old and 3 year old sons after her husband was locked up with an 8-year prison sentence for a drug conviction.

The 31 year old woman turned to drug smuggling to make ends meet and alleged she did a delivery last month for the first time, netting her a 200,000 baht payout (about 2 years’ salary at the Thai minimum wage). After her first success, she says a drug gang contacted her and offered 400,000 baht to move this large shipment of 4.6 million pills that had been brought in across the Laos border.

After the bust, police plan on investigating further and attempting to trace the supply chain and arrest higher-up operatives. Drug running is common in the province as it borders Laos where massive drug distribution takes place. Over 20 million speed pills have been confiscated in Nakhon Phanom just since the beginning of the year.

Last year 5.7 tonnes of crystal meth were impounded in the northeastern provinces of Thailand, a staggering increase from the 266 kilogrammes that were uncovered throughout 2019, according to the UN Office on Drugs and Crime.

Laos has become an essential part of the drug trade in Southeast Asia in part because of both the Covid-19 pandemic and the political turmoil in Myanmar which have lead to tightening the porous Burmese border and thus restricting the flow of methamphetamines and other illegal narcotics. Drug smugglers have rerouted to move drugs through Laos in order to enter into Thailand.

Stardust
1 hour ago, Thaiger said: If you like your spicy papaya salad with a little extra kick, a som tam vendor in Nakhon Phanom was arrested today with 4.6 million speed pills. The woman was apprehended when border patrol police…
DiggR
2 hours ago, DoUKnowWhoIAm said: ".... after her husband was locked up with an 8-year prison sentence for a drug conviction." Poor kids. Had the same thought and concern now that both parents are gone. Hopefully there is extended family…

PapayaBokBok
Dang!  Guess I need to find a new Papaya Bok Bok vendor--That salad had a certain KICK! Zab zab!!! 5555
BJoe
She did what she needed to do to provide for her family. I admire that. Better than useless politicians getting paid to sit back on their assets and accomplishing nada,  nothing.

bushav8r
A som tum   vendor doesn't have the resources or  connections  to simply claim  they were selling flour and get away with it.

British man Barry found 3 days after getting lost in forest