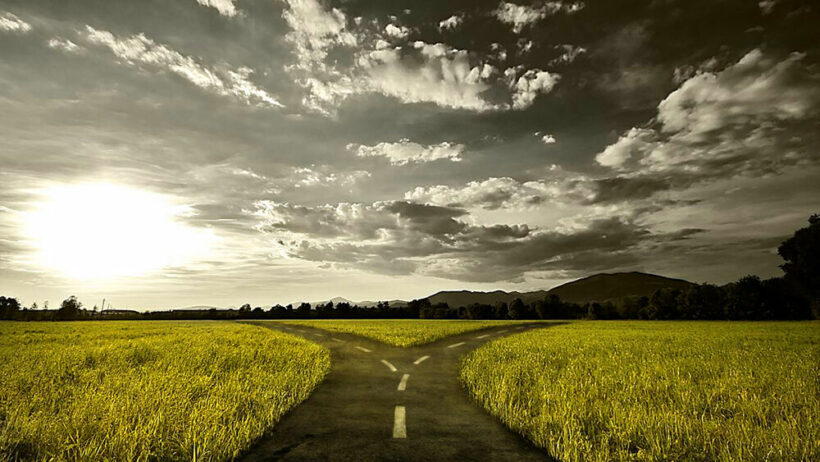 There are two Covid conversations going on at the same time, depending where you live in the world.

In one Covid universe, countries are lowering restrictions, reopening borders, letting their citizens walk around with out face masks and, generally, get on with things.

In the parallel Covid universe, countries are gingerly re-opening their borders but still with restrictions, expensive insurances for arriving travellers, local community restrictions and, in Thailand’s case, alcohol curfews.

Part of the divergence in approach is simply timing. The Omicron variant of Covid, far more transmissible but less dangerous, kicked off in the US and Europe approximately 6 weeks before the same surges starting appearing in Asian nations. So, whilst most western nations now see themselves in the latter stages of the Omicron ‘wave’, many Asian nations are now peaking.

I shall be telling this with a sigh
Somewhere ages and ages hence:
Two roads diverged in a wood, and I—
I took the one less travelled by,
And that has made all the difference.
by Robert Frost

The other part of the fork in the Covid road is cultural. There is now an undeniable Covid fatigue spreading across western countries where relatively patient populations are now just ‘over it’ and want to move on. Governments are increasingly facing backlashes and protests as citizens are saying ‘enough is enough’.

Even the truckies are revolting… so to speak.

The lesser symptoms, partly from the weakened variant, and fortified by a more-vaccinated community, are giving the western media the chance to take the foot off the Covid accelerator as readers and viewers want to talk about just about any OTHER subject, rather than Covid.

In Asian cultures there is a greater willingness to heed instructions from governments and authority, not always, but certainly when it comes to the coronavirus.

But even though there are many Asian neighbours keen to re-open their borders there will a longer, lingering, ore cautious hangover from the pandemic. Certainly the wearing of masks will prevail, even after governments remove particular local laws and mandates. The use of hand sanitisers will also linger longer, such are the habits stamped into the Asian Covid consciousness over the last two years.

Whilst many believe we are in the autumn of the first phase – the health emergency – the next phase is going to impact people a lot more than the first.

In many western economies, central banks and governments have been providing stimulus, subsidies and cash payments for people to work from home or simply help get them through the lockdowns. In some cases, countries have been ‘printing money’ they don’t have and driving their economies into deeper debt.

In the US, the ‘Fed’ is still buying up bonds in a cute new economic euphemism called ‘quantitative easing’. Whilst this is meant to wind up next month, the pain will only have just started as the US stares down the barrel of an engorged national debt along with a weaker economy to try and pay it back.

In Asia, the stimulus was both less and more targeted. Actual handing out of cash for citizens was rare and most of the government monies spent were on programs for finding and changing jobs, domestic travel subsidies and kick-starter loans for new businesses. Still, altogether, the spend was much more frugal.

In some of the Asian countries the national debt is a fraction of the more developed western nations which many also allow them to recover faster. And Asian nations figure prominently in the list of countries (or territories) with the largest foreign exchange reserves – China, Japan, Taiwan, Hong Kong, India, Singapore and South Korea are all in the top 10.

So, whilst the first phase of the Covid pandemic may be in its final throws, the next phase is going to be a test for many of the countries that have spent big during the health emergency and now find themselves weakened economically.

The tale of the two Covids may have just begun and the split between the diverging roads may continue to widen.

Two roads diverged in a yellow wood,
And sorry I could not travel both
And be one traveler, long I stood
And looked down one as far as I could
To where it bent in the undergrowth

‘The Road Not Taken’ by Robert Frost

What do you think about the lumpy recovery of countries post-Covid? When do you think the recoveries will begin? Join us in the Thaiger Talk forum (below).

Donald
13 hours ago, Pi_Tim said: What about pollution measurement on arrival ?? Since 3 days, some parts of (formerly) Bangkok are scoring above 150 !! How many are getting complications from pollution ?? and could have survive from Covid ?…

Poolie
6 minutes ago, Donald said: Don't try to make a sensible comment. After two years of scare mongering and government and media induced hysteria people no longer think rationally. The amount of deaths caused by the Covid hysteria will far…
LoongFred
Thailand's approach has been pragmatic. There are changes as conditions change but so far they've done a great job. Covid is on the rise again and hopefully peaking. This isn't the time to relax entry rules unnecessarily and to make…

Donald
3 hours ago, Poolie said: Hyperbole. I suppose it is supposed to be a fancy term for exaggerated. Well it is not. The majority of people affected live in the poorest countries on earth living on a day to day…

Poolie
30 minutes ago, Donald said: I suppose it is supposed to be a fancy term for exaggerated. Well it is not. The majority of people affected live in the poorest countries on earth living on a day to day subsistence.…

Omicron subvariant BA.2 accounts for 18% of Covid-19 infections in Thailand