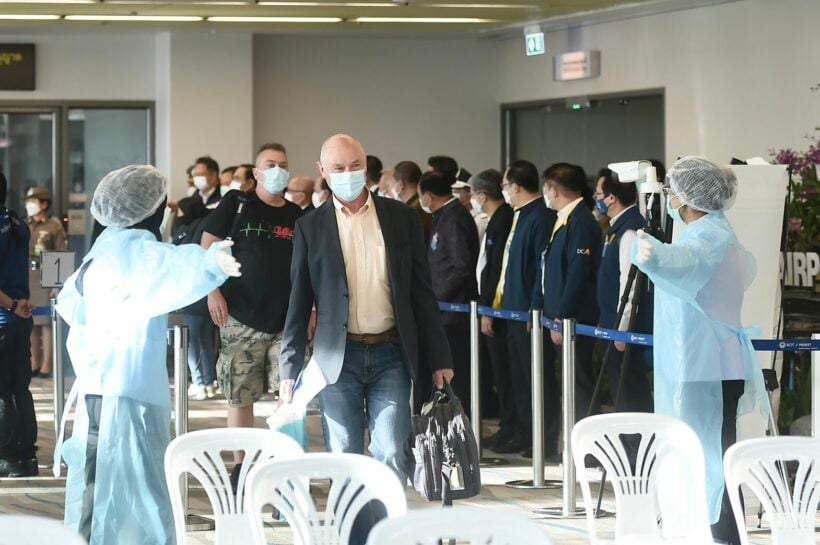 FILE PHOTO: Officials warn it's not the arriving foreigners that should be worried about for Covid-19 in the Sandbox. (via Royal Thai Government)

More information is coming out now about the first Phuket Sandbox traveller to be infected with Covid-19 yesterday. The man from the United Arab Emirates was fully vaccinated with the Sinopharm vaccine more than 7 months ago and had tested negative before boarding his flight to Phuket.

But while infections from abroad make headlines, the Phuket Provincial Public Health Office says we should be more concerned about domestic Covid-19 infections making their way into Phuket.

The international Covid-19 infection was one member from a group of 14 aboard Emirates flight EK378 that arrived in Phuket just after noon on Tuesday. He received an RT-PCR swab test for Coronavirus when he landed, as does every other arriving traveller, and then waiting for his results in his hotel room, not allowed to go out as mandated by the Sandbox rules.

He had tested negative before leaving the UAE, but the PPPHO explains there are different kinds of Covid-19 testing and it’s possible that a different method did not detect the virus while the swab did. As soon as the test results returned a positive, the man was admitted to a hospital and the 13 other travellers on his flight entered a 14 day sequestration at an alternative local quarantine facility.

While many have baulked at the repeated testing and severe Covid-19 safety measures, this situation shows why the regulations were enacted. Some view it as a negative for the new Phuket Sandbox program, but the quick identification and subsequent isolation of the Covid-19 infection could also be seen as a testament to the effectiveness of the Sandbox procedures.

Meanwhile, the chief of the PPPHO observed that one positive Covid-19 test does not spell doom for Phuket and that there have been more cases each day of Coronavirus infections coming in overland borders from domestic tourists. He urged people travelling from the highest-risk areas like Bangkok and its surrounding provinces and the 4 southern provinces that have had strict containment measures enacted to be responsible. They should self-isolate and watch for symptoms and be honest with their contact tracing timeline, and of course, be tested before attempting to enter Phuket.

Still, while news of infections is worrisome, the PPPHO Chief reassures people that, statistically, Phuket is doing well. Only a handful of infections are being uncovered each day, and out of about 2,400 people who have now arrived internationally in the Sandbox, only 1 infection was found, 0.04% of the total arrivals.

Only 25 total infections were recorded in the first week of the Sandbox and officials are urging everyone to be vigilant – wear a mask, wash your hands, maintain social distancing, and avoid large gatherings. The PPPHO chief encouraged everyone to set a good example to allow Thai tourism to begin to flourish again.

AussieBob
One thing that has become clear to me about this episode and the post, is that many people think a Covid vaccine is some sort of protection against getting Covid - it is not and they are not.  A covid…

bushav8r
1 minute ago, AussieBob said: One thing that has become clear to me about this episode and the post, is that many people think a Covid vaccine is some sort of protection against getting Covid - it is not and…
BookShe
It is somewhat disgusting, this small fact was never mentioned in the propaganda. If any person tested positive in the same group, bus, flight the whole group can say goodbye to their vacation. I guess it's a small problem for…

Shark
18 hours ago, EdwardV said: Sinopharm is generally considered the better between it and Sinovac.  I can tell you... people whom actually understand medicine better then me (they have a degree in this)... disagree on this statement. My best choice…

JohninDublin
7 hours ago, Exile said: The part about a travel group of 14 was a lie. It has since been known the entire flight was sent to quarantine.  The flight only had 15 passengers. I have not seen that. Source…