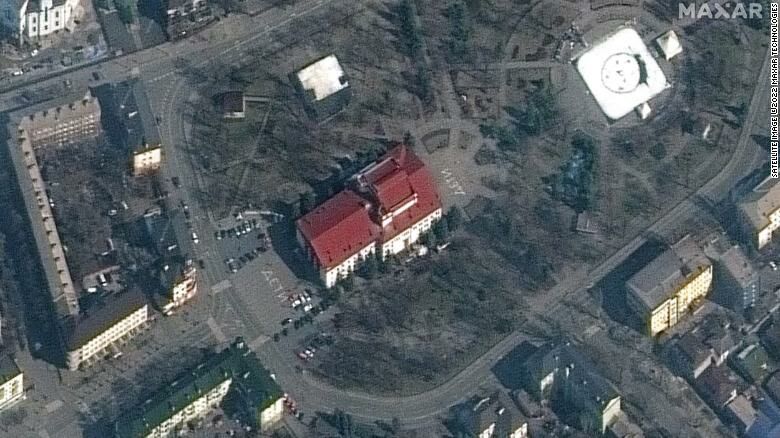 A satellite image shows the theater in Mariupol with the word "children" clearly written on the ground at the front and rear of the building. Russian forces bombed the building. Credit: Maxar Technologies

• Ukrainian President Volodymyr Zelensky gave a speech to the US Congress on Wednesday. In a virtual address, Zelenksy repeated his plea for a no-fly zone and called for more sanctions on Russia, as Russian forces inch toward Kyiv, with intensified fighting around the capital. After Zelensky challenged him to be “the leader of peace“, US President Joe Biden pledged an additional $800 million in security aid for Ukraine.

• President Biden called Russian President Vladimir Putin a “war criminal” for the first time yesterday, after he signed off on nearly US$1 billion in security assistance to Ukraine to combat Russia’s invasion, with the new package including drones and anti-aircraft systems. The Kremlin quickly condemned Biden’s comments as “unacceptable and unforgivable rhetoric”.

• Putin said yesterday that his military campaign in Ukraine was a success and that he would not allow the country to become a “springboard” used to threaten Russia. Despite the public military intelligence showing otherwise.

• Anti-terrorism prosecutors in France announced on Wednesday they have begun a war crime investigation into the death of Franco-Irish Fox News cameraman Pierre Zakrzewski, who was shot near Kyiv while covering the war in Ukraine.

• Meanwhile, the Ukrainian army is beginning to counterstrike Russian forces in a number of directions, according to a senior adviser to Zelensky.

• In the besieged city of Mariupol, Russia has attacked a theatre where civilians have been sheltering, the city’s deputy mayor told the BBC. An estimated 1,000 – 1,200 people may have been inside and the number of casualties is unknown. A satellite image from Maxar Technologies shows the theater in Mariupol with the Russian word for “children” clearly written on the ground at the front and rear of the building before it was bombed.

• In the northern city of Chernihiv, Russian forces have fired at civilians who were standing in line for bread, killing 10 people, President Zelensky said.

• Ukraine and Russia have made a 15-point peace plan that includes a ceasefire, and withdrawal of Russian troops if Ukraine declares neutrality, according to According to a report in the Financial Times of London. The plan would also require Kyiv to declare that it will not join NATO and that it will not host foreign military bases in the country.

• The mayor of Melitopol, Ivan Fedorov, has been exchanged for nine Russian prisoners. the Russian conscripts were between 18 and 19 years old, a press secretary to Ukraine’s president said on Ukrainian television. Following Fedorov’s abduction five days ago, residents of Melitopol came out to protest against his abduction. Russian troops had allegedly held him hostage for more than five days.

• The prime ministers of Poland, the Czech Republic and Slovenia safely returned to Poland yesterday after undertaking a dangerous train journey to Kyiv, where they met with President Zelensky and senior Ukrainian officials.

• Western UN Security Council members demand an emergency meeting on Thursday, according to diplomats. US, UK, France, Albania, Ireland, Norway have called for the emergency meeting to discuss the Ukraine humanitarian situation, ahead of a council vote on a Russian-drafted resolution on Friday.

• The UN refugee agency UNHCR said on Wednesday that 3,063,095 Ukrainians have fled the country since the war began on February 24, up from Tuesday’s figure of 93,495. Around half of those who have fled are children, according to the UN children’s agency UNICEF.