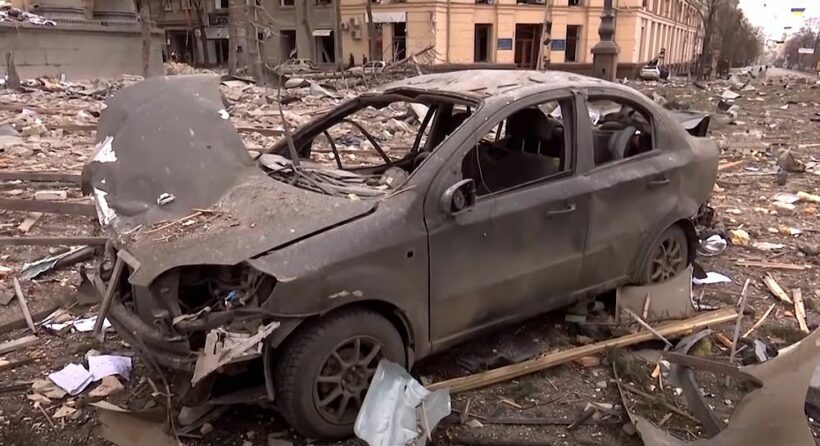 This is the first of The Thaiger’s daily update briefs on, not only the ongoing battles across Ukraine, but the key milestones covering the rest of the international perspective relating to the story. These will be updated twice a day and also be part of a new daily program on The Thaiger YouTube channel.

• As the Russian invasion of Ukraine enters its eighth day, four major explosions have lit up the night sky in the capital of Kyiv. Witnesses have captured the explosions on video, as Russia’s invasion becomes the first war captured on social media in real time. It remains unclear what the Russians were targeting or whether anyone died in the blasts.

• Russia is intensifying its attacks on key Ukrainian cities, as it attacks on three fronts in the north, east and south

• The French Foreign Minister Jean-Yves Le Drian is warning that the situation in Ukraine “could further deteriorate under relentless bombardment from Russia… it’s possible that the worst is ahead of us”.

“Russia’s hope to end the war quickly is gradually fading away”.

But he reiterated that it’s still important to maintain dialogue with Moscow “because Putin and Ukrainian President Volodymyr Zelensky are not talking directly”.

• The United Nations General Assembly voted 141-5, with 35 abstentions, to demand Russia halt the war. The vote came after the 193-member assembly convened its first emergency session in a quarter century.

• Russian forces have taken control of Kherson in the south. It’s the first major Ukrainian city to fall. Hundreds of people are feared dead in the southern port of Mariupol following hours of sustained shelling, according to the city’s deputy mayor.

• The UK Ministry of Defence says that the Ukrainian cities of Kharkiv, Chernihiv and Mariupol “remain in Ukrainian hands… despite heavy shelling by Russian forces”.

• An oil depot in Chernihiv, a northern Ukrainian city, was hit by shelling during a Russian airstrike this morning. Clouds of thick black smoke were belching from oil tanks, with firefighters battling the flames and intense smoke.

• Ukraine says more than 2,000 civilians have been killed in the conflict.

• Russian military convoy is now 25 kilometres from Kyiv, but progress has stalled.

• The International Criminal Court is opening an investigation into potential war crimes by Russia in Ukraine. Meanwhile, the IOC has banned Russian and Belarusian athletes from competing in the Winter Paralympics in Beijing, to begin this month.

Raugh
14 hours ago, Marble-eye said: "Facebook on Friday became the first American tech giant to be blocked by the Russian government.. The move could foreshadow further restrictions against other tech companies such as Google, which owns YouTube, and Twitter.…
oldschooler
2 minutes ago, Stardust said: And I always wondering when I read all this nonsense why no eastern europe country is saying we want to ally with Russia or belong to mother Russia. And why all other countries around Russia…
butterfly
On 3/5/2022 at 6:50 AM, KRLMRX said: if Russia stops now, the owners of Wall Street and their managers in the White House, the Kremlin will come up with a new war - this is how this system works. Russia…
butterfly
1 hour ago, oldschooler said: Sweden & Finland now forced by idiot invader Putin to join NATO well at least they know what to expect next, the joke is on them

China asked Russia not to invade Ukraine… until after the Olympics