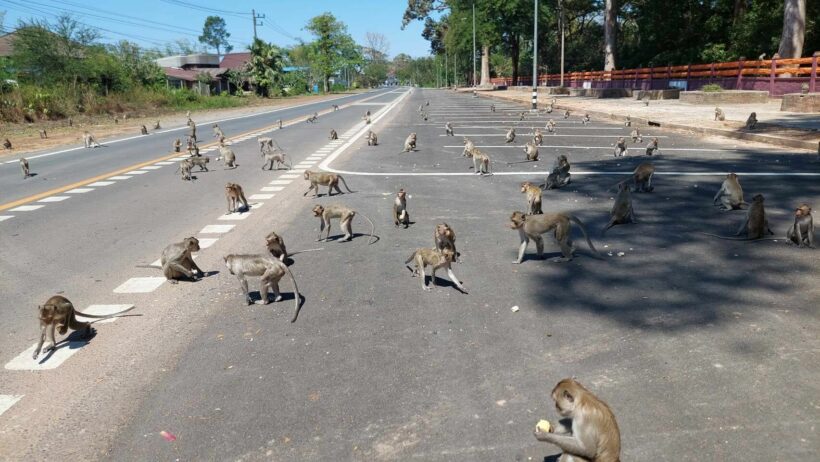 Hungry monkeys have been causing problems for residents in the northeastern province Amnat Charoen. Not hundreds, but thousands of monkeys have moved from a nearby forest to the residential area in search of food, many raiding houses and roaming into the roads, some getting hit by oncoming cars.

Residents in the Pana district shared with Thai media that around 2,000 to 3,000 monkeys from the Don Chao Puta Forest Park came into town looking for food. Natural food sources in the forest were scarce due to the hot weather and not enough food was provided at the temples in the park.

The monkeys travelled into town in six different groups with 300 to 400 monkeys in each group. The monkeys raided houses, hospitals, and schools looking for food. Many also roamed into the road and reports say that monkeys are hit by cars almost every day.

Residents have asked local authorities to solve the problem. Some say they would like to see a road sign put up to alert drivers to reduce their speed and beware of the monkeys. Some residents also say that more food should be provided to the monkeys to keep them from raiding homes.

Skip
Beware... look what happened when USA started handing out food to their monkeys...
Grumpyoldman
This country is overrun with dogs, cats and now monkeys and they want to feed them? Insanity.