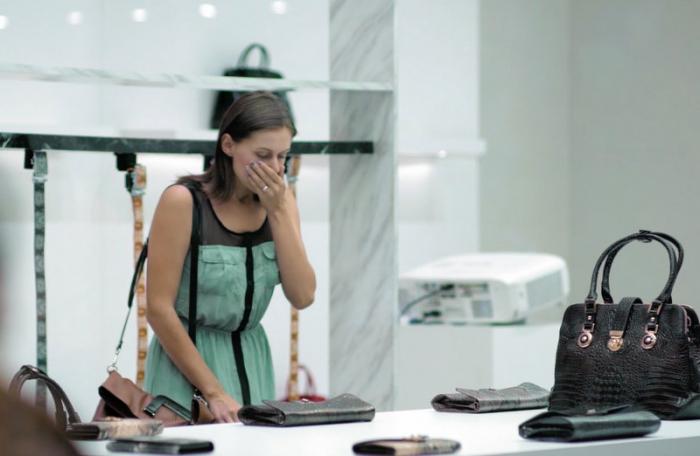 Unsuspecting shoppers are filmed browsing through rows of snake-skin shoes and crocodile-skin handbags, but once they look inside, they see beating ‘hearts’, stretchy ‘sinew’ and pools of ‘blood’ that coat their hands and feet.

The campaign is aimed at shining a spotlight on the cruelty of the exotic-skins industry.

“Every year, hundreds of thousands of reptiles are crudely bludgeoned and skinned alive, all for the sake of so-called ‘luxury’ shoes, belts and bags,” says Jason Baker, PETA’s vice president of international campaigns.

“PETA Asia’s gruesome pop-up shop reminds shoppers that the only way to keep blood and guts out of our closets is to choose vegan clothing, shoes and accessories.”

Thailand has the world’s largest crocodile farming industry and is the prime destination for international fashion brands looking for skins, says PETA.

According to the latest statistics distributed by PETA Asia, about 700,000 crocodiles are raised in crowded tanks or pools of fetid, stinking water on 22 large-scale and 929 small farms across the country. A recent PETA exposé reveals workers sawing open reptiles’ necks while the animals are still alive.

Snakes killed for their skins are commonly nailed to trees, and their bodies are cut open from one end to the other as they are skinned alive, PETA reports.

Their mutilated bodies are then discarded, but because of these animals’ slow metabolism, it can take hours for them to die. Lizards are often decapitated, and others writhe in agony as the skin is ripped from their bodies.

“Leatherworks allows people to experience and see with their own eyes that every leather product caused a sensitive animal to endure a miserable life and suffer a terrifying death,” says Puripong Limwanatipong, associate creative director of Ogilvy & Mather Advertising Thailand.

“By surprising shoppers with the cruelty behind the exotic-skins industry, we can wake them up and spark change that will save animals’ lives,” he concludes.

Diving: To splurge or not to splurge