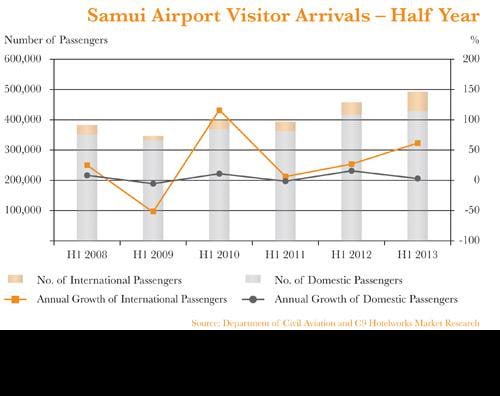 PHUKET: Everywhere you turn these days, tourism talk inevitably winds up on the subject of the mass market. It’s not unlike barreling down a dead-end street on a supercharged, high-speed bulldozer. There is no such thing as a damage control button to push. Yes, there will be collateral damage.

Meanwhile back on the broader Thailand train of thought, and particularly in regards to the other island on the opposite side of the isthmus, Samui comes into the picture. We’ve just finished our annual midyear research review of the island’s hotel sector and the results frankly well exceeding our own expectations.

Using market-wide hotel occupancy as a gauge of good health, through the end of June island properties hit 75% occupancy, which is up 7% compared to the same six-month period in 2012. If you look towards the full-year trading figures, the high period that peaks in August is still to come so there is every reason to assume the positive vibes will be sustained.

Naturally the question for those who understand the airlift issues is how are visitors getting to the destination. Unlike Phuket, where low-cost airline carriers and charter flights clog the air bridges, over in “mini-me land”, Bangkok Airways is tourism’s lifeblood.

As in our own skyrocketing storyline here, international direct flights have elevated Samui’s numbers with added services to Hong Kong and Singapore. The introduction of flights from Silk Air was a serious boost to the party and new routes from Kuala Lumpur and Penang has been like a kick in the pants, gaining forward momentum.

Getting inside the numbers, or shall we say crawling between the sheets and getting up close and personal is always a telling exercise. The global shifting sands of travel are impacting virtually every corner of the globe. Two of the island’s legacy tourism markets, namely the UK and Italy are continuing to decline. Did anyone say Euro-crisis?

Moving over to the new players as can be expected both China and Russia are picking up the pace, as is India. Spillover from Malaysia is also rising up due to the direct flight mentioned previously. Yet with all the talk of new things, Germany and Thailand are the top two providers of visitors to paradise. Despite all the talk of cost-conscious Thais not wanting to shell out hard-earned baht on what is deemed to be an expensive airline route, nearly 100,000 domestic travellers came in the first half of this year.

What’s most impressive in the stats though, has been the ability of island hotels to drive up room rates in the upscale and luxury tiers. Despite all the chitchat about quality tourists throughout the Kingdom, clearly there are folks out there that are willing to pay more for more boutique offerings. In this case, less might be better.

Yet looming on the horizon, there remains the specter of larger mega trends as the ratio between individual travellers and groups is tilting to the latter. Likewise a 12% pick up in occupancy for the budget and economy tiers indicate that demand at the lower end is a force to be contended with.

In the great quality versus quantity debate, perhaps the most profound indicator that Samui can sustain its current trajectory is the development pipeline of new properties. This currently stands at only four new hotels and a total of 319 new rooms opening over the next two years. Anyone driving around Bangkok or Phuket is likely to spot new hotels popping up as far as the eye can see. So in terms of supply and demand fundamentals, Samui certainly gets a high five from us.

While it’s not fair to compare apples to oranges or bananas to mangoes, the temptation to comment on Phuket versus Samui is a tender trap. These are, and will always be very different places.

Yes the latter has its own demons in terms of limited road infrastructure, a cap on airlift and increasing infrastructure issues. Yet talk to a growing number of voices overseas in the luxury travel world, and there is a decided twitter about the little island in the gulf.