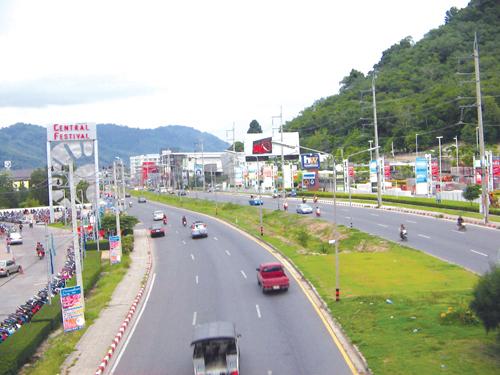 PHUKET: A dynamic shift in Phuket’s tourism market is pushing demand away from the beaches. Overseas tourists are pushing up numbers at the large malls, such as Central Festival and Jungceylon, where the top three nationalities of customers are Chinese, Russian and Australian.

In 2012, Russian and Chinese visitors accounted for 38% of international airport arrivals to the island, according to a new report issued by consulting firm C9 Hotelworks. This trend is consistent with Thailand’s continued surge in the mass market, where last year over three million visitors from China and Russia came to the
country.

C9’s Managing Director Bill Barnett said: “Hot on the heels of a rising Asian middle class and the resurgence of a prolific group travel segment, is that Thailand’s resort markets are becoming urbanized playgrounds. It’s not just about the beach anymore, as shopping and attractions are gaining momentum as strong demand catalysts.”

Extensive research by C9 in its 2012 Hotel Market Update revealed that tourist spending is heavily weighted towards major shopping malls, which command 73% of the market share of island attractions, followed by 16% for entertainment shows, such as Fantasea and Siam Niramit.

Extensive consumer research showed that Phuket visitors spend 30% on accommodation, with retail shopping close behind at 24%.

Visitor numbers are pushing Phuket International Airport to its limit, with over 9.5 million passengers processed last year. Mr Barnett said 2012 saw a ‘staggering’ volume of traffic, which exceeded the airports stated capacity by 47%. Compounding this was a 13% surge in year-on-year (y-o-y) growth in inbound and outbound passengers.

Asia’s other iconic resort destination, Bali, saw 2012 y-o-y international arrivals growth shrink from 22% in 2011 down to 4.15% last year, while Phuket retained its overseas momentum with a 16% surge in 2012. C9’s research indicates that the sheer size of the charter flights from the emerging Chinese and Eastern European markets is the key differentiator.

Airlift continues to drive Phuket’s hotels where full year 2012 market-wide occupancy hit 76% and an average room rate of US$142. While Patong experienced the strongest occupancy demand, surprisingly, growth in the luxury tier pushed up occupancy by 9%.

However, there is still some concern about the incoming supply pipeline of over 4,000 new hotel rooms between 2013-2016.

Analyzing the shifting sands of Phuket’s tourism market, Mr Barnett added that the sector to watch was the expansion of “off-beach” demand generators. “Tourism behavior is evolving and it’s clear that a new rule book applies in the numbers-based game.”

Phuket Property: Finding the balance between culture and a modern lifestyle