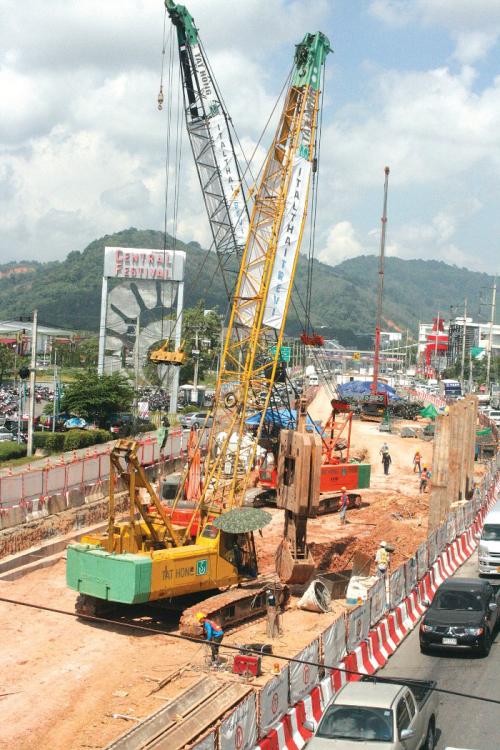 PHUKET: Our paradise island has been famed (and defamed) the world over for its many “s” attractions (and distractions) – sea, sun, sand, surf, sailing and sport… among others.

Nowadays, the island is increasingly associated with one more “s”: shopping. Although residential projects – condos, housing subdivisions, hotels and luxury villas – continue to make up most of the island’s construction sites, a budding retail sector seems to indicate a bright commercial outlook for the island’s not-so-distant future, with a number of newly-completed, under-construction and in-the-pipeline projects dotting Phuket’s map for 2013, 2014 and beyond.

Name says it all

As the public and private sectors continue to expand on and invest in crucial infrastructure, Bangkok-headquartered, Central Group is leading Phuket’s retail charge (no pun intended). Living up to its name, the group’s local flagship retail artery, Central Festival Phuket is smack in the middle of what is rapidly becoming the island’s 21st century commercial-residential heart.

At the recent official launch of its Central Festival East annexed shopping wing (Homeworks), the group’s local management hinted at plans for a new luxury shopping center to be developed on the lot to the mall’s south side, at the site of the Thainaan restaurant.

In the short run – more traffic, shopping and of course, more money for the economy. In the long run? Just have a look at the neighborhoods surrounding Bangkok’s Central BTS station (Siam Square, Chitlom, Central World and so forth) – this is Phuket’s destiny.

Looking to attract more Thai and foreign tourist shoppers, Jungceylon Shopping Center is currently undergoing significant renovations to the tune of 50 million baht. Covering an area of 3,000 sqm, this represents the mall’s biggest refurbishment in seven years of operations. Three prime zones being renovated include the Banking Zone; The Port, which includes bakeries, coffee shops and ice-cream shops; as well as the Spa Zone, which as its name suggests, features massage parlors, a beautifying area and shops selling spa products.

In addition to this, Jungceylon will welcome 30 more select retailers for leading clothes brands, as well as restaurants, namely, Esprit, CPS, CC-OO, Melisa Jelly Dreams, Beauty Buffect and Charles & Keith, among others. As for the bigger picture, unlike Phuket Town and Kathu, Patong is quite

limited in space, but that certainly doesn’t mean future development will be capped. Look at Hong Kong, Honolulu or even Pattaya Bay, for an idea of where the once quiet town’s skyline will be heading in the coming decades.

Beyond the mega shopping malls, there’s a handful of other interesting if not innovative retail projects worth noting:

An evening stroll in Old Town

“Lard Yai Walking Street” is set to begin operating from Sunday, September 29, on a section of the historic Thalang Road in Phuket Town. Out of the planned 150 stalls, more than half have already been booked, with 4sqm retail units starting from as little as 300 baht per day.

Don Rimnanthapisit, project president, stresses that the idea is to have high quality merchandise on sale. “Items to be sold must not come from a factory, the sellers have to put effort to ensure they are unique,” he said. The high quality, eco theme of the market means no counterfeit goods and no styrofoam.

Moreover, no smoking and alcohol consumption will be permitted. About half of the retail space will be allocated for food with the remaining 50% dedicated to clothes, souvenirs and local products. “Thalang is Phuket’s cultural road, so the goal of this activity is to make people feel they are in Phuket,” says Mr Rimnanthapisit, “to achieve the goal reflected in the slogan “Let Phuketians be Phuketian”.

The vendors will be encouraged to wear traditional clothes like scoop-neck T-shirts for men and well-fitting shirts with sarong for women. As for food, there will be both local and international dishes to try because as Don Rimnanthapisit, explained “Phuket is a multicultural city.” The walking street will be open every Sunday from 6pm to midnight. Thalang road will be closed from traffic from 2pm to allow vendors to set up their stalls.

Just a few blocks east of the Weekend Variety Market on Wirat Hongsyok road is Suan Luang Market, just opposite King’s Park. Suanluang Market will provide one more stop for night market enthusiasts, tourists and locals alike. Having launched last year as the Benzy Mall, the project was recently rebranded following a change in ownership.

A project manager revealed that the new shopping plaza is undergoing a transition. “We’re open for business and still accepting new tenants, and will be undergoing some renovations in the coming months to implement unique ‘This is Phuket’ themes. For example, we have plans for a ‘Tin Mine’ corner, and other suitable themes that will highlight Phuket’s history and unique character,” she explained.

Initially launched under a “kids play while parents shop” concept, the current project has canned the original plans for a miniature water park, repositioning from an “afternoon leisure shopping” zone to a “casual and cultural evening affair”.

The new owners will utilize the area where the water park was intended, as a zone for staging special events, activities and even small exhibitions, with ample space for setting up temporary booths. Explaining what will differentiate the market from other night markets, the project rep said: “Instead of just having a crowded market where you walk and shop, we will give shoppers places to sit down and take a rest, take pictures as well as enjoy and take part in special events or activities going on.”

The project offers two primary types of retail units: three-by-four-meter, glass-window units with annual leasing rates ranging between 55,000-80,000 baht, as well as two-by-two-meter, retractable metal door units available from 35,000 baht a year. Most of the existing tenants are selling clothes, apparel and other types of personal accessories, as well as souvenirs and handicrafts. There is also a “food court” zone comprising about 10 units, half of which are currently occupied.

An eye-catching development in Cherng Talay is the Boat Avenue shopping street, being developed on a 30 rai (48,000sqm) plot which is just a stone’s throw from Laguna. Unofficially open for business, the project includes a container mall (shops made out of refurbished shipping containers) and will also include a “B-mall”, Villa Market and 24 three-storey buildings. About a tenth of retail lease space is still available. Monthly leasing rates start from 300 baht/sqm, units ranging from 25 to 100 sqm units, or 7,500 to 30,000 baht/month.

Also, there are two units available for sale, from 10 million baht. About 30% of the space is allocated for food and beverage retailers and another 30% for clothes. A 1,000sqm portion of the development will be occupied by Villa Market (under construction) and the rest will be offices, ticket agencies, tailor shops, spas and a bike rental shop, among others. There is parking space for 200 cars. Some shops are already opening but the grand opening of Boat Avenue is planned for November.

If you build it

While this article only mentions several highlights of Phuket’s up and coming retail sector (if you think your project should have been mentioned, email us on info@phuketgazette.net), it goes without saying that the local economy is expanding, and rapidly at that.

As far as the property sector as a whole, we need not only focus on the onslaught of new hotels, shoeb

Phuket Property: Best of the best 2013