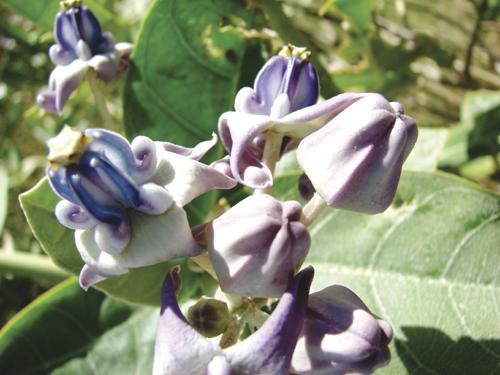 PHUKET: Odd how political correctness is responsible for changes in language. Take terms for indigenous people. When I was knee-high to a grasshopper, North Americans were called “Red Indians”.

That was later changed to a more PC term –”Amerindian”. A bit of a mouthful, the expression in turn became “American Indian”. Now, and maybe finally, we talk about “Native Americans”.

The world of political correctness is not as touchy about plants. In any case, their origins are not always so clear-cut. How many of Thailand’s plants are native to Southeast Asia, or even to Thailand? How many, by accident or design, have simply turned up – like tourists in Phuket?

The process is further complicated by the process of naturalization, a process whereby plants not only settle in their new cultivated environment, but go AWOL, and disperse to create new colonies.

Nonetheless, Phuket has a number of decorative plants, which have existed here in the wild for eons. Drive past any wooded, marshy areas and you will probably see one of them – the alocasia – with its huge rich green leaves sprouting from a fleshy stem. Maybe, a meter or more across. No wonder their vernacular name is the “elephant ear”.

Alocasias, native to Thailand, are sometimes and by a calculated reversal of the naturalization process, uprooted and transferred to gardens, where their dramatic presence can light up any dank corner.

Much harder to find is gloriosa superba, a climbing lily. Well worth searching out, it is a very distinctive flower with narrow crinkly petals that are yellow at the base and become red half-way up. This lily has tendrils at the ends of its leaves and prefers to grow among dense vegetation where it can cling on to tall surrounding plants.

If you do attempt to grow it, remember that it likes company. Personally, I think it looks better in the wild.

Native here, it will thrive in sandy soils near the sea. Not difficult conditions for Phuket.

The butterfly pea (clitoria ternatea) is probably known to most gardeners here, since it tends to appear from nowhere, probably dispersed by hungry birds. It is a fast-growing creeper with delightful, solitary, deep blue flowers with a yellow center.

It has long been used in Southeast Asia as an aphrodisiac (because of the flower’s shape), as a herbal remedy and also for coloring food and hair.

Hence, there is no doubt about its antecedence. It definitely belongs here.

In fact, the butterfly pea grows all over the island, a plant that rapidly covers waste ground, and is at home climbing trees. Useful too: it not only adds precious nitrogen to the soil, but is one of the most promising medicinal plants for treating a range of ailments from diabetes to cancer. The last of my natives is calatropis gigantia or Indian milkweed.

A member of the dogbane family (apocynaceae), it is highly poisonous – but that does not stop monarch caterpillars from munching away at my plants.

It is a substantial bush, often a small tree, which thrives – like the butterfly pea – in Phuket’s climate.

The oval leaves are large and pale green, but the plant’s chief claim to fame is its clusters of white or pink flowers which, because of their longevity, have been used for centuries in leis, garlands and tassels.

The milkweed can tolerate saline winds and has been planted as a windbreak in Rawai and Nai Harn. But it is, in essence, a wild thing, which colonizes wasteland everywhere.