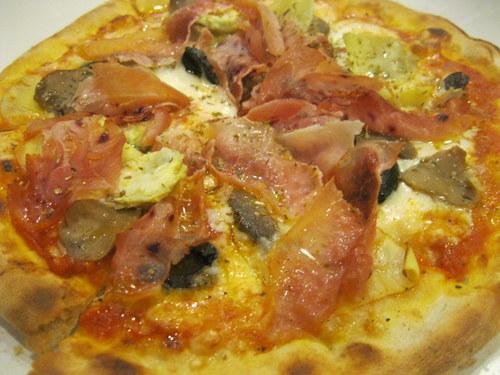 PHUKET: When I got back from a visit to the US recently, a friend asked if I had missed Thai food. I had not. I love it, but what I hankered to eat in Phuket was pizza at “Crust”, a stylish but welcoming little place in the Sino-Portuguese gallery next to Index Living Mall off the Bypass road.

Nattanee “Annabelle” Unsuen and her boyfriend Premin “Nut” Kamphee are the chef-owners of the restaurant, which opened last June. Their diplomas from Le Cordon Bleu and their stint at Amanpuri (he in the Italian restaurant and she in the bakery and cold kitchen) show in their consistently delicious and attractive dishes.

A place called “Crust” had better be able to produce the goods, and it does: the pizzas, baked in a handmade oven visible at the back of the restaurant, have crispy golden edges and thin chewy middles. Flavorful sauces and fresh toppings complement but don’t overwhelm the crust, making these the best pizzas I’ve had in Phuket.

They’ve been a hit with everyone I’ve taken to the restaurant, from twenty-something colleagues to Thai grandmothers who proclaimed they didn’t like bread or cheese as they tucked into another slice of the Capri – a perfect balance of savory Parma ham and olives, mild mozzarella and earthy artichoke and mushrooms.

Crust has the classic pies, but also creative twists, like those modeled after pasta sauces: the bolognese, puttanesca, and carbonara, and (who knew this was possible?) breakfast pizza, topped with tomato, mozzarella, ham, spinach and egg. White pizzas include smoked salmon and brie and the priciest on the menu, Mushrooms and white truffle paste. Each comes in two sizes: mini (more than for one person) and regular.

The pasta selection shows the same respect for tradition and ability to embellish on it. Besides a classic carbonara, there’s a daily special version with Italian sausage, in which fat coins of sweet-salty sausage perk up the smooth creaminess of the dish. And traditional pesto gets redesigned in the Sicilian pesto, the bold one-note of basil amicably tempered by ricotta, sundried tomatoes, almonds, pine nuts, garlic and sweet chili.

But pizza and pasta alone do not make a meal, so order one of the excellent salads as well; perhaps the Parma, which expands the classic partnership of ham and melon by adding quarters of strawberry and tomatoes under a raspberry vinaigrette. Or the citrus arugula, with orange sections, shaved parmesan and almonds tossed in a slightly tart lemon dressing.

Whenever possible, the restaurant serves organic greens, in line with Annabelle’s and Nut’s desire to provide healthy food. That desire also means there are no soft drinks on the menu. Instead, Crust offers a wide assortment of fresh juice concoctions and smoothies, as well as wheatgrass shots, beer, wine and espresso drinks.

For diners who want heartier fare, check the daily specials: Australian strip loin with green pepper sauce, Herb-steamed, free-range chicken and lamb stew are among them. Annabelle chose mains that her Australian father likes to eat, and he stops by often, to the satisfaction of her mother, who now spends less time in the kitchen.

One of the restaurant’s secret weapons is not even on the menu. Written at the top of the chalk board of specials is the simply-named soup of the day: split pea, carrot and sweet potato, lentil, pumpkin. Appearing almost as an afterthought, these heavenly soups, slow-cooked on a mirepoix base, creamy without cream, decorated with a swirl of olive oil and little strips of bacon are so good, I call ahead to reserve a bowl.

Desserts are available for perusal in a small refrigerated case at the bar: tangy lemon tart, tiramisu, banoffi, and a creme caramel so perfectly poised between lightness and richness that my twenty-something colleagues ordered extra to take home.

Phuket Dining: Not just another chef