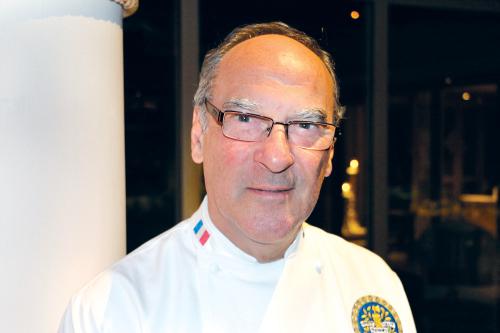 PHUKET: There are times when you simply can’t turn down an invitation. When the personal chef of the President of the French Republic invites you for a dinner, it is one of those times. Even more so when it’s Bernard Vaussion, a chef who served under six consecutive French presidents, who recently came to Phuket to cook a presidential dinner set at the Trisara resort.

Vaussion spent 40 years in the kitchen of the Elysee Palace, the last eight as the head chef. During that time, he prepared countless dinners for the most powerful men and women on the planet, among them President of the United States Barack Obama or His Majesty King Carl XVI Gustaf of Sweden. But when I ask him what he’s going to miss the most about his job in the palace, he doesn’t even mention the glamor and replies without a second’s delay.

“The people, my team who are like my family. I’ll miss the team spirit of the kitchen of the Palace Elysee.” And quite a kitchen it is at 500 square meters, filled with kitchen equipment dating back to the times of French Kings. A kitchen where all meals for the president are prepared.

“There’s one kitchen in the Elysee but there are two types of menu. One official and one more personal and family style,” explains the chef.

“Sometimes the president asks the cooks to prepare something Japanese, or Italian. But the president does have some more down to earth food too. Maybe not burgers and French fries but an every day meal, for sure.”

It seems that food in the Palace Elysee is a very masculine affair, and in the end, it’s always the president who decides what’s served. “At the beginning of each week I prepared menus for all the official dinners, private dinners, flights and so on,” says Vaussion. “I give a choice of a few starters, main courses, deserts and in the end it was the president who made the choice and signed each menu every week.”

Certainly the president of France must be a resolute man, but even for him, to choose from what Chef Vaussion has on offer must be a difficult task. Especially that he has to keep in mind not only his, but his honorable guests’ preferences. And this is one of the reasons why the Club des Chefs des Chefs was formed – the world’s most exclusive gastronomic society, associating the personal chefs of various heads of state.

“We meet once a year, talk, create relationships which allows us to call each other when there is a state visit, and prepare a menu according to specific preferences,” explains Vaussion. An undertaking that is not only difficult but also of great importance – after all it’s at the dining tables where some of the most important decisions concerning the future of our planet are made.

“Very often, I saw difficult relations between heads of states made more friendly thanks to the quality of food, great wine, beautifully decorated table and perfect service,” says Vaussion, before assuring me that the Club des Chefs des Chefs’ slogan “Politics divide people, food brings them together” is well reflected in the diplomatic reality.

And it’s the reality of ever changing French cuisine that is reflected in the menus and dining habits of the French presidents. It was president Giscard d’Estaing who moved away from the traditional, heavy diet of French Kings and towards the more modern, lighter style. Much later came Nicolas Sarkozy who left his mark on the menu by removing the cheeses in order to make dining as quick as possible. Current President Francois Hollande brought the cheese back but budget cuts made the Elysee’s sommelier think twice before serving the best wines for average occasions. And on the topic of wine – Chef Vaussion isn’t very much impressed with the palaces cellars: “The collection isn’t actually that impressive, it’s just 15,000 bottles of wine.”

I wrap up our conversation asking about the menu for the evening and if we, casual people, can count on the same quality as the heads of states.

“The quality of the food tonight will be the same as in the palace because Trisara’s team is very skilled. And the dishes are the same as I used to serve to different presidents,” replies the chef and proves his words an hour later serving the guests at the “Eat like a president” dinner – some of the best dishes the kitchen of the Elysee Palace has to offer. Having tasted the Fondant de Tourteau a L’advocat, Foie Gras Micuit aux Cerises or Filet de Boeuf Truffe made me realize that some politicians might be power hungry, but they certainly are never left hungry.”