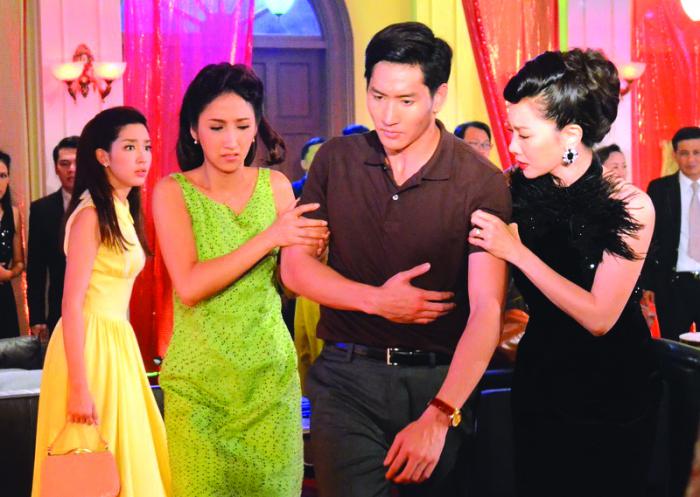 PHUKET: Any “farang” who lives with a Thai partner will be familiar, possibly all too familiar, with the rarefied world of television soap opera. As I watch, I wonder what impact these soaps are having on the Thai psyche. That they are amazingly popular is beyond doubt. Viewing figures are massive; they are watched religiously in most households, and especially by women, every night. My partner would not miss an episode of her favorite soap for the world.

Certainly they do preach a doctrine that espouses the notion that good ultimately will triumph. But on the distaff side, it can also be argued that soaps do nothing to educate, or stimulate a critical appraisal, that people just want to identify and empathize unthinkingly with their heroines and heroes. Surface values such as beauty, glamor, wealth, self-assurance, even an element of deception, are applauded; there is no encouragement of Brechtian “alienation” where the spectator stands back from the action and thinks dispassionately about all these shenanigans. The use of violence, moreover, and especially of firearms sets an unhealthy example. After all, gun crime is a daily and deadly event in the bustling sois of Thailand.

It has even been proposed by one critic that Thai soaps may be in part responsible for the spate of recent political unrest in the kingdom, that the genre’s apparent disregard for responsible conduct, its glorification of outrageous behavior, has entered the national psyche. While this is an extreme position, the diagnosis may contain a germ of truth. Conversely, soaps may promote, at least in more politicized eyes, a growing sense of resentment that the classist status quo, foregrounded by such melodramas, needs to be changed – and dramatically.

The genre is of course a global phenomenon: everywhere it is driven by suspense, by an open narrative structure that poses an unspoken question at the end of each episode – what happens next? The Thai soap opera, like many aspects of the Kingdom’s culture, has developed its own very distinctive features. Occupying two hour, prime-time evening slots, the vast majority of TV serial dramas, known as lakorn, privilege Thailand’s high society, with opulent settings emphasizing the wealthy lifestyles of the characters.

The mise en scene thus owes more to American soaps such as “Dallas” than to any European tradition. Houses are invariably portico mansions with lavishly appointed furnishings and manicured gardens, outside settings are exotic, palm-fringed beaches or famous landmarks, cars are expensive Porches, Mercedes and BMWs, the clothes of the youthful leads are “haute couture”, of the older generation, expensive Thai silk. The actors, men as well as women, look like “Vogue” models, their glossy black locks straight from a shampoo commercial, their overstated make-up camouflaging every blemish. Not a hair or false eyelash out of place, even in situations of great emotional stress or life-threatening danger – of which there are plenty.

The plots are generally formulaic, even archetypal, with a pivotal emphasis on youthful romance, on the trials and tribulations that true love must endure before it finally wins through. While the putative hero and heroine are typically identified in the first episode, there are both innocents and serpents in paradise, each identified by recognizable signifiers: the good are usually the most beautiful and most elegant women, or the most debonair men; the scheming woman, sometimes a jilted lover, is likely to be the over-dressed one with vivid scarlet lips and a pouting demeanor, and the evil man, as in the Western versions, often the character with a thin mustache and shifty eyes.

The cast also includes older and supposedly wiser characters: one common stereotype is that of the powerfully assertive matriarch who exercises control from the wings – another, that of a taciturn father-in-law involved in shady business deals. If katoeys are part of the plot, then they usually have predictable roles, acting as a safety valve for the temporary relief of dynastic tension.

Music is another important signifier. As in international cinema, it is an atmospheric device, offering, for example, clues about a sudden hike in dramatic intensity or a shift in a character’s internal feelings. But though a soap may feature a motif in the form of a repeated song or melody, there is rarely a continuous, orchestrated or electronic “score”. Indeed, to foreign ears at least, this “synced” music is frequently intrusive and unsubtle – the harsh sawing of a single violin to indicate conflict, or the plaintive piping of a wind instrument to signify sadness. Flashbacks are common currency: for example, if the heroine is musing, or dreaming about past events, the scenes are generally shown in monochrome, a convention immediately understood by the audience.

In a typical scenario, the “femme fatale”, and there is sometimes more than one, is probably in love with the male lead and desperate to do anything to “get her man.” The laws of soap demand that she must fail, ultimately, but along the way there will be deception and manipulation, violence and even suicide and murder. In keeping with Thai superstitions about ghosts (pee), the dead, wild of hair and red of eye, sometimes return to haunt the living.

The machinations of the serial medium demand many twists and turns. In a recent episode of Eesaa, the “bad” character, her evil plotting exposed, first seeks forgiveness from her mother and then drowns herself, her tear-stained face sinking slowly beneath the moonlit waters. In a “camp” moment, the hysterical heroine then throws herself, weeping and distressed, on the shrouded corpse of her rival. All soaps have deathbed scenes aplenty, and moving incidents in hospital wards are de rigueur, a hushed environment where it is “touch and go” as to whether the victim will pull through. All grist to the melodramatic mill.

Paradoxically, however, and in accordance with the strict Thai laws of censorship, there is no nudity, no simulated sex, not even open-mouthed kissing. When the lovers finally get together, they gaze adoringly into each other’s eyes and maybe brush lips, but full physical (and still clothed) contact is reserved for attempts – always unsuccessful – at sexual harassment or rape.

Modesty must be preserved. True romance must triumph over horrid reality. In the world of the soap opera, it always does…

Last Gasp of a humorist