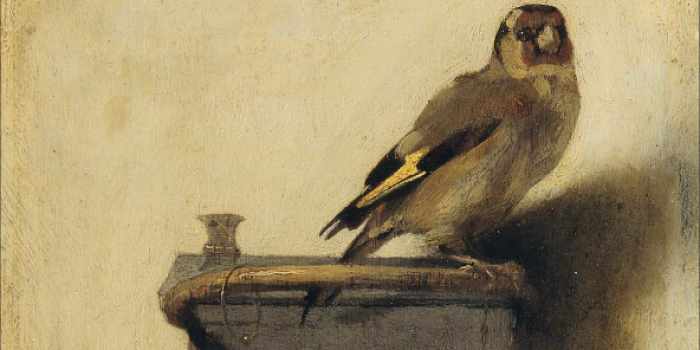 PHUKET: Once a decade, Donna Tartt produces a hefty, great novel. At age 28, she published The Secret History, a murder mystery centered on a clique of young classical scholars at Bennington. A decade later, she returned to her Mississippi childhood for The Little Friend. And now she has just won the Pulitzer Prize for her third and best novel, The Goldfinch (Alfred A. Knopf, New York, 771pp, 2013).

The title refers to a small masterpiece by Dutch painter Carel Fabritius, student of Rembrandt, teacher of Vermeer. In 1654, when he was just 32, the huge explosion of a gunpowder arsenal in Delft would not only take his life, but destroy almost all of his work. A rare survivor, “The Goldfinch”, painted on wood, the size of A4 paper, shows a bird held captive by a chain at its foot. It is a great favorite of the mother of 13-year-old Theo Docker, a half-Irish, half-Cherokee beauty from Kansas who worked as a catalog model in New York before getting her art history degree from Columbia. Her husband, a failed actor turned alcoholic, has abandoned her and she lives with their only son in an apartment on Sutton Place, facing the East River, where she struggles on her salary at an advertising company.

The novel opens as Theo, writing in an Amsterdam hotel room 14 years later, recalls the last day of her life. On their way to his private school on the West Side, mother and son are caught in a rainstorm and duck for shelter into the Metropolitan Museum of Art. Theo takes notice of an elfin girl – bright red hair, golden brown eyes – accompanied by an elderly misshapen little man. That’s when a terrorist bomb rips through the museum.

When Theo returns to consciousness, “The Goldfinch” in its busted frame lies on the floor next to him. Dying nearby, the little old man exhorts him to save the painting and entrusts him with a ring to deliver to his partner at an antique furniture store in Greenwich Village.

In the aftermath of the bombing, Theo learns that the elfin red-headed girl, Pippa, the old man’s niece, is badly injured. Theo’s mother is dead. Plunged into devastating grief, Theo now dates his life into Before and After. This is all told by Theo in the first 50-page chapter.

So complex is the story of his next 14 years, so compelling and intricate and surprising the plot, that it would be criminal to reveal any more of it. Suffice it to say that the action moves from New York to Las Vegas, back to New York and on to Amsterdam. In high school Theo Docker finds the great friend of his life, Boris, a sly Russian rogue with an Australian accent, overly fond of liquor, drugs and shoplifting. Boris is Huck Finn to Theo’s Tom Sawyer, the Artful Dodger to his Oliver Twist. The pair will be accomplices in the novel’s last desperate caper involving “The Goldfinch”.

Through the years, Theo has kept the painting, worth many millions, as a talisman of his mother. Here he describes the joy of taking the painting out of hiding:
“Quickly I slid it out, and almost immediately its glow enveloped me, something almost musical, an internal sweetness that was inexplicable beyond a deep, blood-rocking harmony of rightness, the way your heart beat slow and sure when you were with a person you felt safe with and loved. A power, a shine came off it, a freshness like the morning light in my old bedroom in New York which was serene yet exhilarating, a light that rendered everything more sharp-edged and lovely than it actually was because it was part of the past and irretrievable…”

So rich are her descriptions, so vivid her characters, so sweeping and majestic the scope of her novel, that Donna Tartt can only be compared to the 19th century giants Tolstoy and Dickens. At the end, when Theo experiences his dark night of the soul in an Amsterdam hotel room and emerges transcendent and redeemed, the reader shares his triumph. There is no higher order of fiction.

Moving walls, puzzles, sacred tombs – escape if you can