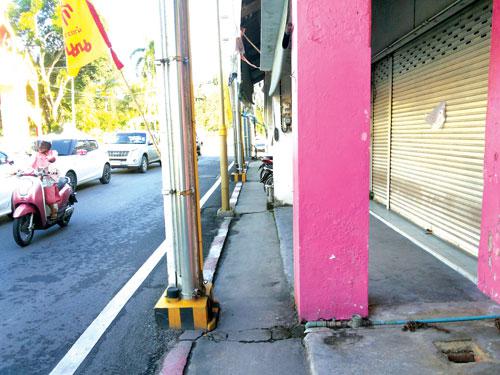 PHUKET: “Under the weather” is one way to describe how I was initially feeling one Monday morning last month as I started traversing the city-block on foot, westward bound for the province’s prime asphalt artery, where I could catch a sawng taeo to work.

My oversized umbrella – held down at my side like it had been the pride of a knight, ready to be drawn for battle – provided a small-yet-significant sense of security as I hopped and skipped over puddles left over from an early morning drizzle.

Although there were no looming thunderclouds in the grayish-blue sky overhead, the weather can turn on you without even a second’s warning, especially this time of year, in this part of the world.

A beginners’ urban obstacle course at best, by no means was this part of Phuket challenging or tedious to walk; there are narrow yet passable sidewalks along most of the stretches of Montri, Dibuk and Thepkrasattri roads that I had to cover, and the traffic for the most part is slow and orderly enough to warrant safe crossings.

Unlike many of the streets and sois I’d scaled in Bangkok’s massive concrete jungle over the last decade, these particular Phuket Town streets were relatively clean and easy to navigate, and as I was starting to learn once again, enjoyable.

A small public park I must have driven by a countless number of times over the past year, suddenly stood out in all its serenity – a playground, vibrant gardens, a fountain – how could I have lived here so long without affording the due admiration for such a lively and charming neighborhood?

Indeed, I had taken many things for granted since first getting behind the wheel in Phuket two years ago, and now that I was forced to rely on my shoes again, new yet familiar thought synapses began to reactivate in a dormant part of my brain – such a re-awakening was long overdue!

Before I get more into that, first let’s rewind back to Sunday, when I had an automobile accident.

I must have been coasting at about 80 kilometers per hour (48 miles per hour) on highway four in Krabi, Southern Thailand, en route back to Phuket, when I suddenly slammed on my brakes in a reflex.

In all but an eye-blink, appearing and obstructing the road immediately ahead of me was a pickup truck, stopped in the middle of the single, northbound highway lane.

The truck must have been waiting to turn onto an adjacent eastbound road (that I only noticed after the fact). It’s mind boggling how the highways department could sanction such a deadly turnoff like this on a cross-provincial highway – one that requires all northbound highway traffic to come to a dead stop in only a short moments notice; no turn lane, no stop sign nor traffic light, just a single, hardly-visible overhead hazard light. Add rainy conditions and you’ve got inevitable disaster.

As it had been raining much of that Sunday morning, the road was slippery, so I found out the hard way upon braking, suddenly losing control of my vehicle, swerving to avoid colliding head-on with the back of the stopped truck. Evading the truck, instead I hit a roadside sign before continuing a few meters down into a lush and muddy ditch.

Everyone was intact; my son belted in the front seat, wife in the back, both screaming in shock after their abrupt awakening to the screech of brakes. I yelled for everyone to get out of the car, fearing fire could ensue.

There were a few onlookers who had started coming down into the ditch to check and see if anyone was hurt or worse. I relayed to them that we were unharmed; they helped open the passenger side door so my son and wife could escape, and I forced my door open and climbed up the ditch too.

The truck was nowhere in sight at this point, but I proceeded to call the insurance company. Upon learning that there was no damage to another car, LMG Insurance was quick to claim no liability whatsoever, and didn’t seem keen on offering any kind of support/assistance. I had to literally demand for them to send a tow truck after they made it clear that I’d have to clear the costs.

The insurance I had was the best one available for my 11-year-old car, classified as class 2+ (sawng buak), and in the fine print requires another vehicle to be damaged for there to be any liability assumed by the company. Moreover, in Thailand, fault is almost always assumed to belong to the person who collides.

Signs, curbs, hit-and-runs, dangerous obstructions on the road – no chance, “you’re on your own!” is the first and last message I got from LMG. The sad reality is this: had I crashed into the truck, all the damage would have been covered, regardless of who was at fault. But because it was a sign I crashed into, forget it.

Had I crashed into the truck, the accident would have surely been worse – my family might not have been so lucky. Nonetheless – no regrets here! When I think about what could have happened, I’m very fortunate. Cars can be fixed or replaced – life has no price tag.

Meanwhile, life moves on – and I’m ever grateful for this fact. Swallowing the reality of my situation was difficult at first, especially on Monday morning anticipating the logistics to get to work 10 kilometers-or-so away. It had been two-plus years since I’ve had to rely on public transport on this island, and I’d forgotten how easy and affordable it can be, during daylight hours anyway.

With the need to plan my commutes, I suddenly found myself with more time – to walk, to wait, to look, to listen, to think, to plan, and even to read (a novel) again. I felt free again – like a ninja with a sacred mission, all I’ll need for the day strapped on my back. Indeed, it feels good to breath, tuning in to the symphony of the city.

A bad week? I’m not so sure anymore – I’d like to believe that there is a true blessing disguised in here somewhere.

Keep checking our online Phuket news pages, join our Facebook fan page or follow us on Twitter @PhuketGazette for the latest local, national and international updates.