“…his swish with the black cape and his screen presence in the foreboding, shiny black high-tech exoskeleton won him a legion of fans.”

Darth Vader has died… May the force be with him. The man who played the bad guy in the first Star Wars trilogy, British actor David Prowse, died at the age of 85 after a short illness.

American actor Mark Hamill, who played Darth Vader’s son, Luke Skywalker, alongside with David and the initial cast of the epic saga, sent his condolences in a tweet.

“So sad to hear David Prowse has passed. He was a kind man & much more than Darth Vader.”

“Actor-Husband-Father-Member of the Order of the British Empire-3 time British Weightlifting Champion & Safety Icon the Green Cross Code Man. He loved his fans as much as they loved him. #RIP”

Star Wars co-star, and fellow Brit, Anthony Daniels, who played the gold-plated and effusive C3PO in all but one of the 12 Star Wars instalments, paid tribute to Prowse’s contribution to the saga.

“Dave’s iconic figure dominated the finished film in ’77 and has done so ever since.”

David wore the ominous black suit and helmet to play the Star Wars villain Darth Vader although it was the American actor James Earl Jones who provided the character’s voice in post-production. George Lucas felt that David’s West Country English accent was “unsuitable for the part”. The decision to replace David’s voice caused a long-term rift between actor and director that eventually saw David cut out of official Star Wars publicity events. But his swish with the black cape and his screen presence in the foreboding shiny black high-tech exoskeleton won him a legion of fans. 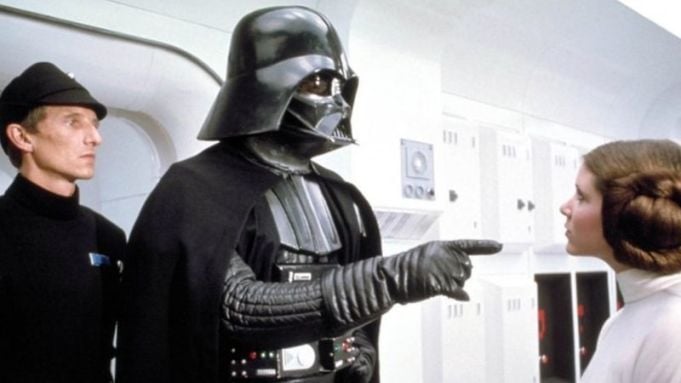 David’s career as an actor spanned 50 years, but it was his role as the Sith Lord in Star Wars that brought him international fame and attention.

But it was his role as the “Green Cross Code Man” from a British road safety campaign that Prowse said he was most proud of. David was awarded an MBE, Member of the Most Excellent Order of the British Empire, in 2000 for that role.

David Prowse was born into a working class family and grew up in a council estate in Southmead, in southwestern England. He gained a scholarship to attend Bristol Grammar School. He had a passion for bodybuilding and was crowned British Weightlifting Champion several times in the 1960s. He became lifelong friends with actors Arnold Schwarzenegger in his weightlifting years.

His towering figure helped land him roles as monsters and villains in TV shows and films. He played the monster in “The Horror of Frankenstein” in 1970 and a bearded torturer in “Carry on Henry” in 1971. That same year he made an appearance as a bodyguard in Stanley Kubrick’s dystopian film “A Clockwork Orange” in 1971. He went on to play Darth Vader in all three of the original “Star Wars” films, in 1977, 1980 and 1983.

With the success of Star Wars, Prowse became a regular on the fan circuit and attended conventions around the world for almost 40 years, but he was rumoured to have later fallen out with director Lucas and was banned from official events in 2010.

He published an autobiography, “Straight from the Force’s Mouth,” in 2011.