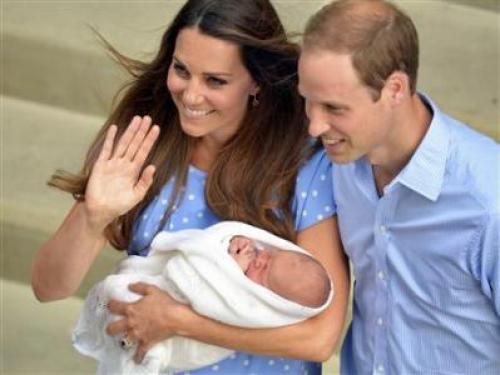 PHUKET: Prince William and his wife Kate gave the world its first glimpse of their new baby yesterday when they left hospital with the boy who is third in line to the British throne.

To huge cheers from well-wishers and hospital staff, the beaming couple waved and took turns to hold their son, wrapped tightly in a white blanket with only the top of his head visible.

“We are still working on a name, so we will have that as soon as we can,” William told reporters, adding that he could not be happier. “He’s got her looks, thankfully.”

“It’s such a special time. Any parent … will know what this feeling is like,” she said before William drove the young family away in a Range Rover.

Kate, 31, gave birth to the couple’s first child on Monday afternoon, ending weeks of feverish anticipation about the arrival, and all three spent the night in the hospital – St Mary’s in west London.

They adhered to tradition by giving the public the first sight of the baby on the steps of the hospital as they left – just as William’s father Prince Charles and late mother, Princess Diana, did with him.

The baby’s name will be announced later. George and James, both traditional royal names, were favoured choices with British bookmakers.

Kate’s parents, Carole and Michael Middleton, were the first visitors to see the couple and their new child. Asked if she would reveal the name or had made any suggestions, Carole Middleton laughed and said: “Absolutely not.”

Wrapped in the flag

Hordes of TV crews, photographers and royal fans wrapped in British flags were camped outside the hospital for the first glimpse of the baby, who will be called the Prince of Cambridge.

To mark the birth, the Royal Artillery fired a 41-gun salute at London’s Green Park and 62 rounds were fired at the Tower of London. Bells at Westminster Abbey, where the couple married in April 2011, rang out for more than three hours.

Outside the Queen’s London residence, Buckingham Palace, a military band played “Congratulations” following the traditional Changing of the Guard ceremony.

William and Kate, who met when they were students at university in Scotland about 10 years ago, have officially been known as the Duke and Duchess of Cambridge since their wedding.

The couple, who have been living in a cottage in north Wales where William is based as a Royal Air Force helicopter pilot, will eventually take up residence with their baby at Apartment 1A in London’s Kensington Palace, William’s childhood home, when a 1 million pound ($1.5 million) refurbishment is completed later this year.

Royal experts said the new prince would now be taken out of the public glare.

“Having a baby is a very private moment, and they are a private couple, so the next time we see the baby will be the official photo, and that could be weeks,” said Joe Little, managing editor of Majesty magazine.

PHUKET: Australia has told Britain it hopes it will remain part of the European Union, becoming the latest country to intervene in an emotive domestic debate that may culminate in a referendum to decide if Britain leaves the 28-nation bloc.

Prime Minister David Cameron has promised to hold such a referendum by the end of 2017 if he wins the next parliamentary election in two years’ time, responding to public concerns about perceived EU meddling in domestic affairs and signs that those EU states that use the euro may opt for greater integration.

Australia’s intervention follows calls from the United States and Japan for Britain not to sever its EU ties and suggests that Cameron’s plan to give Britons a vote on the issue is causing unease with some allies.

France and Germany have signalled they want to keep Britain in but will resist it trying to “cherry-pick” the EU policies it likes and dropping those it does not.

Australia’s contribution came in the form of a letter sent from the office of Foreign Minister Bob Carr, published on the website of the British Foreign Office on Monday as part of a review the government is conducting into the country’s EU ties.

“Australia recognises the UK’s strength and resilience and looks forward to seeing it continue as a leading economy and effective power,” the letter said. “Strong effective membership of the EU contributes to this.”

Australia valued the role that Britain played in shaping EU foreign policy, it added. “I hope to see this continue long into the future,” the author, whose name and signature had been blanked out at the bottom, said.

A second letter sent from an unidentified individual based at Parliament House in Canberra said EU membership allowed Britain to better “leverage” its global influence and meant it was viewed as “a platform for trade and investment in the broader EU market.”

“I encourage the UK to maintain its influence by remaining an engaged participant of the EU internal market,” it said. With a market of 500 million people, the EU is Britain’s main trading partner.

The British government said in Monday’s review that the economic benefits of Britain’s EU membership outweighed the loss of independence on policy.

Cameron says his preference is for Britain to remain inside a reformed EU. Trailing slightly in most polls, it remains unclear whether he will win the next election.

He has said he will try to renegotiate Britain’s membership before giving people a straight in-out vote.

Australia is not among the top ten foreign investors in Britain, but in 2011 British government statistics put the value of existing Australian investments at 11.6 billion pounds.

PHUKET: Bribery is the lubricant that helps keep China’s public hospitals running, and the health system would struggle to function without illegal payments to poorly paid doctors and administrators, say medical practitioners and industry experts.

They say government policies are partly to blame for a system in which doctors and other staff expect to be paid extra fees to perform operations and take kickbacks from pharmaceutical firms and medical-equipment suppliers.

The profession’s ugly underbelly was exposed last week when police accused British drugmaker GlaxoSmithKline of bribing officials and doctors for six years to boost sales and the price of its medicines. GSK has called the developments “shameful” and on Monday said some of its Chinese executives appeared to have broken the law.

China is an appealing market for pharmaceutical firms and medical-equipment makers, with spending in the industry expected to nearly triple to $1 trillion (650.2 billion pounds) by 2020 from $357 billion in 2011, according to consulting firm McKinsey