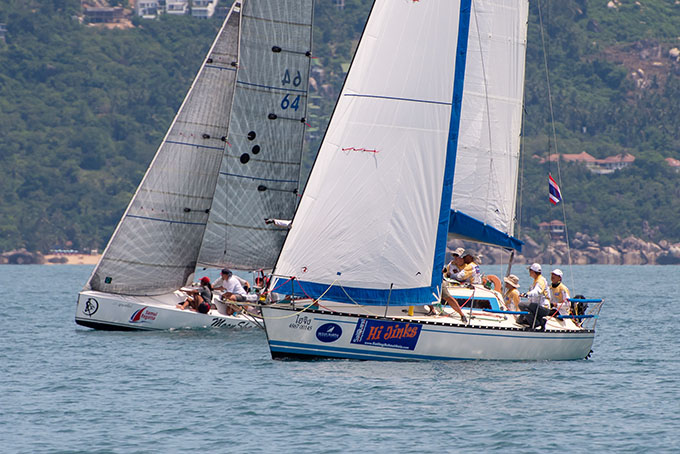 Day 3 of the 2018 Samui Regatta started off with a whimper. The storms of yesterday had gone and the sun was out in force, hopes were high for a return to the tropical sailing conditions which have made Samui Regatta so famous. Come start time all the ingredients were there, bar the wind. With boats milling around the AP was raised and race management were on the hunt for that elusive breeze. By 11am breeze was filling in and Race Officer Ross Chisholm set a “quick” windward/ leeward for all classes.

Despite the variable conditions so far, the race management have kept the race card full with five races for the IRC classes and three for the others completed over the first two days – all things considered, an impressive feat in itself.

The superior speed of THA72 has given most of the IRC Zero crews sleepless nights so far. Whatever the conditions THA72 has been unbeatable and no-one appears to have an answer. That is until today. “Cometh the hour, cometh the man” as the saying goes and today’s hero was in the shape of Marcel Liedts and his crew on the Ker 46, Zannekin (HKG). With the two-lap windward/leeward course shortened to just one-and-a-half laps, the wind arrived on cue and those on the opposite side of the course, namely Zannekin and Freefire (HKG), took advantage of the fresh breeze to make up ground on the rest and in the case of Zannekin correct out for their first win of the series. THA72 had to settle for fourth despite being second across the line, while Alive (AUS) claimed their first line honours but had to settle for seventh on corrected time. 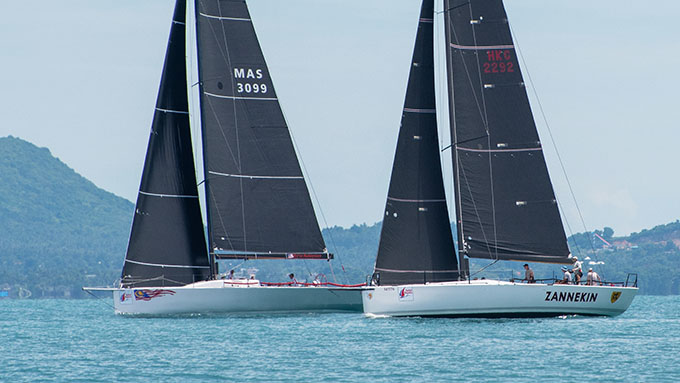 Sarab Singh and his crew on WindSikher (SIN) did what they do best, focused on the wind shifts and played to their strengths, adding another second place to their scorecard. They now sit second overall with a six point lead over third placed Zannekin whose win today puts them one point ahead of Alive in the standings.

In the TP52 division, the racing was exceptionally close with just 62 seconds splitting all four entries. While Kevin and Tom Whitcraft’s THA72 dropped a point today they still sit comfortably at the top and with the drop race in play Freefire’s win today sees them jump into second overall ahead of the Chinese entry Ark 323.

In IRC One, a poor start by Loco (SIN) hurt them badly as Mandrake III (HKG) powered away to their third consecutive win and with it take the overall lead in the standings by way of a count back. Although it was an off day for Loco finishing third, they’re still in the running as they remain tied at the top and will no doubt re-group over the Lay Day and come back all the stronger for it. A solid second today for Fujin (AUS) helps their pointscore and they remain third overall.

Things went to script in Performance Cruising. Jean Rheault’s One Ton Souay1 added a fourth win to their scorecard while the the two Thai entries SailQuest Hi Jinks and Moon Shadow had to settle for second and third respectively.

Like the Performance Cruising boats, the Multihull class completed a single-loop of their windward/ leeward course and the struggle was real. After almost two hours it was series leader, Sudu Red (GER) who crossed the line first for the daily double. Less than 30 seconds separated second and third on corrected time and it was yesterday’s winner, Pixalux (AUS) that got the better of Sudu Grey (THA) stretching their second place lead in the standings to three points.

While the keelboat and multihull crews have a day off from their race schedule tomorrow (Thursday 31st May), the first round of the Asia – Oceanic Hydrofoil Kiteboard Tour hosted by Samui Regatta kicks-off on Maenam Beach. We’ll bring you all the action.