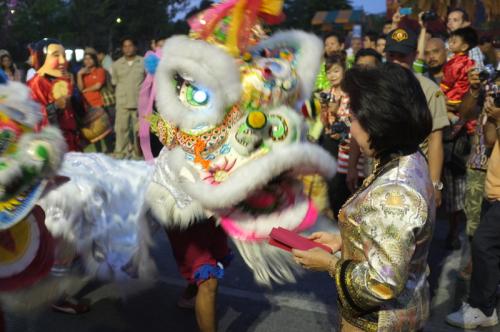 PHUKET: The annual Phuket Old Town Festival will begin on February 15, ushering in the three-day celebration of the town’s historical origins and unique ethnic mix of cultures.

The festival will be held along four main roads in the heart of the Phuket Old Town: Thalang Road, Soi Rommanee, Krabi Road and Phang Nga Road (map here).

“The Old Chartered Bank on the corner of Dibuk Road [and Thepkrasattri Road] will showcase an exhibition highlighting HM King Bhumibol Adulyadej visiting Phuket in 1959, as well as traditional costumes and food from Phuket Town’s yesteryear,” Mayor Somjai said.

Traffic will be blocked from using the streets hosting the event’s activities from 3pm to midnight so people will be able to walk around the Old Town area and enjoy the activities, she added.

“The festival is one of the most important events for local residents, government offices and private businesses to all join together. The festival has been held for 13 years – this is our fourteenth,” Mayor Somjai said.

“The main purpose of this festival is to preserve our beautiful culture, our art and traditions by urging Old Town residents, youths and other local people to take part. Our goal is also to promote cultural tourism in the Phuket Old Town area for tourists to see how beautiful our cultures are,” Mayor Somjai explained.

Scheduled to provide some of the entertainment will be “Leng”, known for his award-winning antics on Thailand’s Got Talent 2012 (view here) and “Looksorn At Ten”, renowned for his singing on the popular television show At Ten (view here).

“There will also be many stalls selling traditional Chinese dishes and desserts,” Mayor Somjai said.

The festival will kick off with the opening ceremony and a parade and at about 5pm. The parade will start from Jatujak market on Phang Nga Road, turn left onto Montri Road, head toward Surin Circle to Phuket Road, turn left onto Rassada Road, then right onto Yaowarat Road and end at Queen Sirikit Park (map here).

From 11pm to midnight on the final night of the festival, February 17, Phuket City Municipality will hold a candlelight ceremony to pray for good fortune in front of the “dragon” featured as a statue in Queen Sirikit Park in Phuket Town is called the Hai Leng Ong Sea Dragon.

“Everyone please be assured that police and other relevant officers will take the best care of you, so you can enjoy the festival,” Phuket Provincial Police Commander Choti Chavalviwat.

“The Royal Thai Police rates the safety of tourists in Phuket very highly as Phuket is second only to Bangkok in terms of the income generated from tourism. Although more than 300,000 tourists will be attending the festival, we will look after everyone’s safety,” Gen Choti added.