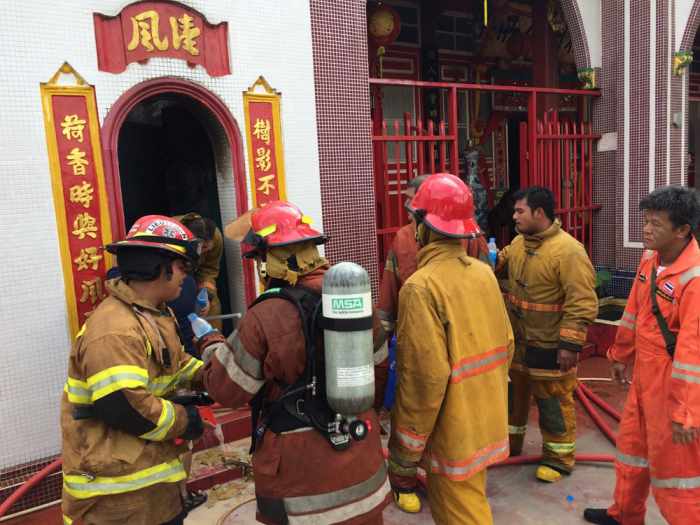 PHUKET: Four fire trucks were called to the Mae Ya Nang Shrine on Krabi Road in Phuket Town this morning after fire broke out in a storeroom stocked with firecrackers and prayer papers.

Phuket City Police reported no injuries from the blaze.

“Firefighters took about 30 minutes to control fire, which broke out at about 8:20am,” said Capt Weerachart Seera of the Phuket City Police.

The fire teams needed to take extra precautions in fighting the blaze as firecrackers exploded and the prayer papers, which are designed to be burnt as offerings, erupted into flames.

“We believe the fire started from an electrical short circuit in the storeroom. So far we estimate the cost of the damage to be about 100,000 baht,” Capt Weerachart said.

Shrine caretaker Saijana Chuaysong, 59, was alone at the temple when the fire broke out.

“I was preparing tea to be offered to the gods when I heard the sound of an electrical surge,” she told police.

“I ran to see what happened, and I saw a lot of smoke and flames coming from that room. I tried, but I couldn’t put the fire out by myself, so I called for help from neighbor.”

Phuket City Police and a fire-investigation team from the Phuket Forensics Office are now inspecting the scene.