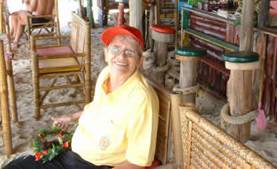 RAWAI: Long-term Phuket resident Erika Perschbacher was found passed away in her Rawai home on Sunday. She was 69 years old.

Erika, a retired German nurse affectionately referred to by locals as “Mama”, was described by those close to her as wonderful, selfless and caring.

During her nine years in Phuket, Erika took it upon herself to provide a home for stray cats on the island and help nurture diseased animals back to health.

Erika usually donned a red cap when she left her house and was frequently seen carrying around her favorite cat Gypsy in a basket. Often she would bring Gypsy to the pub to keep her company while enjoying her evening drink.

She leaves behind eight cats, and has left most of her estate to a local Thai named K. Mon, who works as a housekeeper at a local hotel. K. Mon will take over the house, but will not keep the cats.

While a small provision has been made for the care of the cats in Erika’s will, the best thing would be to find new caring homes for them, said her friend Joan Watson of the Phuket International Women’s Club, of which Erika was a fundraiser and honorary member.