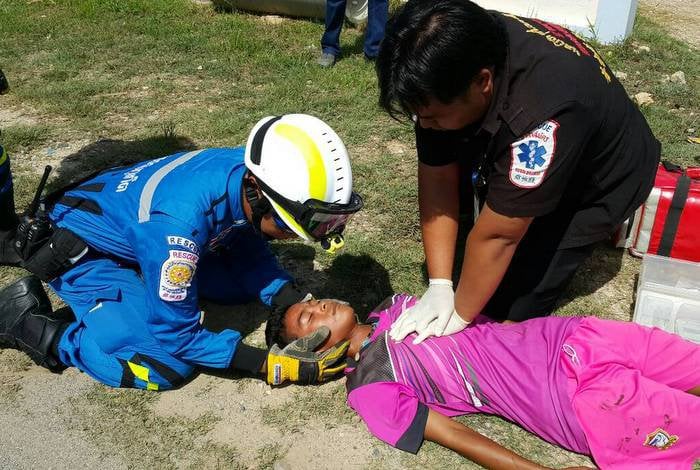 PHUKET: A total of about 200 emergency-response officers and locals joined the full-scale tsunami evacuation drill at Koh Sireh, eastern coast of Phuket, on Tuesday.

“Every department handled the rescue role-playing situations very well and acted appropriately. However, the locals seemed to be more uncomfortable, as this was their first time,” said Phuket Governor Nisit Jansomwong.

The drill simulated a warning being issued through television, radio and SMS alerts to people in Phuket by the National Disaster Warning Center (NDWC) in Bangkok.

Following the warning, people were evacuated to predetermined locations and a number of complications were simulated.

“The drill included additional realistic complications such as injured children, a pregnant woman and a motorbike crash. Additionally, a rescue team had to be deployed to find and recover five people who were reported missing during the evacuation,” Gov Nisit said.

The three-hour drill was designed to ensure that each department understood its responsibilities and had clear lines of communication, as well as to ensure locals had a chance to freshen up their evacuation skills.

“We also want to make sure tourists, as well as locals, are confident that we are well prepared for such a disaster,” Gov Nisit said.

Santhawat Riwleung, chief of the Phuket office of the Department of Disaster Prevention and Mitigation (DDPM), was also satisfied with the results of the drill.

“It went well. I was glad that we chose to conduct this one in Koh Sireh, as we have not had a full-scale tsunami drill here before and the residents need to be comfortable with how the evacuation is conducted,” Mr Santhawat said.

Earlier this month, residents of Koh Sireh fled to high ground in fear of a tsunami, following an earthquake (Video Report here).

Mr Santhawat also this week confirmed that all 19 tsunami warning towers in the Phuket region were in working condition and being tested monthly by the Thai National Anthem being played on them.

The full-scale tsunami drill on Tuesday was postponed from May 8, as it conflicted with the traditional sea gypsy festival, Loy Reua (story here).

It was the second time the annual full-scale drill had been postponed.

The exercise was originally slated to be held on Christmas Day last year (story here), but was later postponed due to sensitivities over the exercise being held one day before the 10-year anniversary of the disaster of 2004 (story here).