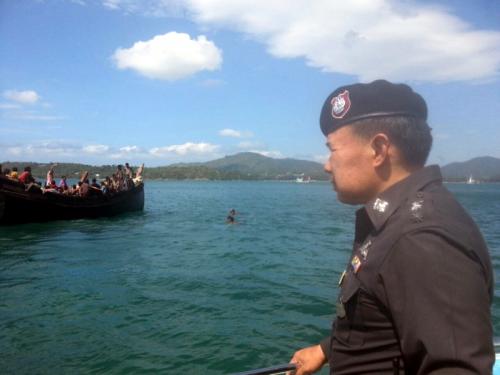 PHUKET: Thailand’s Human Rights Commission (HRC) yesterday told the Phuket Gazette they were “unable to report” on their own investigation into reports of Royal Thai Navy sailors opening fire on a boatload of Rohingya, allegedly killing at least two of the refugees, in February.

“We cannot reveal anything about the investigation,” said Ketsarin Tiawsakul, director of the HRC’s human rights infringement investigation office.

“For now, we have nothing to say. We will release information to the public as soon as we can,” she added.

According to a report by the international agency Human Rights Watch, Royal Thai Navy sailors opened fire on the Rohingya off the Phang Nga coast, north of Phuket, after several of the refugees panicked and jumped ship.

At least two of the refugees were shot dead, said some reports, while other reports quoted eye-witnesses saying as many as up to 25 refugees were killed in the incident.

Two unidentified bodies were pulled from the water in the same area at about the same time as the alleged naval shootings.

“The condition of the bodies made it impossible for police to determine whether or not the men were shot,” a senior Kuraburi District Police officer told the Gazette earlier.

“In fact, we are not sure if the bodies were Rohingya or Burmese fishing boat crew,” he added.

Although Vice Admiral Taratorn Kajitsuwan, Commander of the Third Naval Area, who is responsible for all naval operations along the Andaman coast, denied the shootings to Australia’s ABC News, he declined to comment on the story to the Gazette.