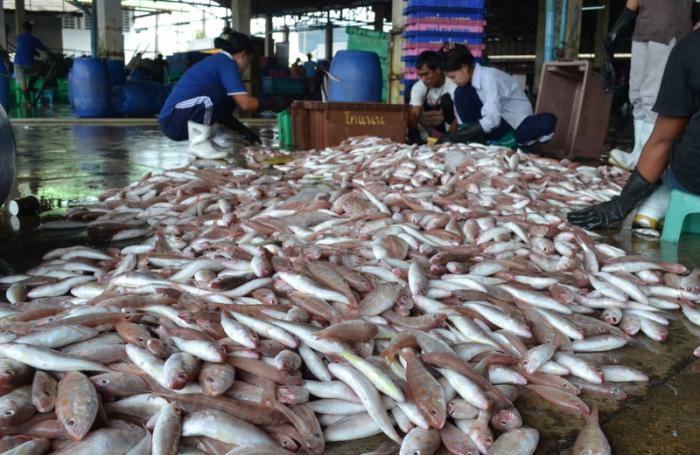 PHUKET: As fishermen across Phuket and Krabi returned to shore after the July 1 reopening of the season, their meager catches furrowed foreheads and drew exasperated sighs.

Fish stocks are dwindling, and many of western Thailand’s captains and deck hands are worried as a fog of uncertainty obscures the future of their industry – and livelihoods.

“Every year it keeps getting worse and worse,” said Maren Boonroat, captain of the Krabi trawler Nam Thawee. “Usually, we catch a lot of fish on opening day. It’s very strange we couldn’t find as many fish as we have in previous years.”

Large fishing vessels were allowed to return to fish in the Andaman Sea after 4,696 square kilometers between Phuket and Trang were closed off so as not to deplete fish stocks during the spawning season from April 1 to June 30.

Conservation officials believe the scarcity of fish is due to a combination of pollution, overfishing and natural weather phenomena.

The paltry hauls seen across western Thailand are problematic for the country’s fishing industry, which employs an estimated 300,000 and contributes over US$3 billion in exports to the GDP, according to the Thai Frozen Foods Association.

Fishermen in Phuket and Krabi are concerned that the diminishing catches seen at the beginning of July may continue throughout the rest of the season, as they struggle to get back in the black after the three-month moratorium.

Many fishing companies are still moribund from the industry’s collapse after the 2004 tsunami devastated the Andaman coastline.

“We’re seeing that this year the numbers have decreased quite a lot,” said Somyos Wongbunyakul, president of the Phuket Fishing Association. “Most of the fish being caught are too small to make the hauls commercially viable, and that’s not something that’s unique to this year. We’ve seen the fishing getting worse for the past several years. More than 20 to 30 percent of local fishermen have gone bankrupt so far,” Mr Somyos said.

Fishery officials in Krabi and Phuket told the Phuket Gazette they are aware of the declining yields across the region, but need more time to gather statistical data before they would be able to implement a plan of action. As for now, they are simply advising fishermen to ‘be patient’.

For his part, Mr Somyos remains skeptical of governmental involvement.

“I don’t think the situation will get better; I think it will only get worse and worse. We always have to help ourselves, nobody out there is going to help us,” he said.

Rewat Boonsop, who owns the Krabi fishing port, said lower than expected yields were also reported by fishermen across that province.

“The fishermen had been out at sea since before midnight on June 30, but returned home with very small catches the following morning,” Mr Rewat said. “Most of the fish that they managed to bring in were also very small.”

Mr Somyos blames three factors for the scant harvest and Thai fishermen’s woes: man-made activities, the law, and the weather.

“The natural factor is the one I consider the most important, and it’s the only one completely out of our control,” he said. “For example, last year, the fishing was better because of El Nino. Actually, before that year, the situation was the same as this, not many fish.”

Mr Somyos was afraid that this year fishermen in Phuket and around the Andaman Sea will suffer a La Nina event.

“A La Nina event will make the fish even more scarce,” he said.

The weather patterns referred to as La Nina generally result in higher-than-normal rainfall conditions in Southeast Asia from June to October.

“Conditions were harsh this year. Normally, strong storms and rain stir up the ocean floor around Phang Nga Bay. The rain also washes leaves and other debris out to sea, which becomes fish food, helping to grow fish populations,” Mr Somyos said. “But this year, we’ve seen a lot of wind and not much rain.”

The changing coastlines and economies in Phuket, Krabi and Phang Nga may also have negatively impacted fish stocks in the Andaman, Mr Somyos said.

“There are now many hotels and tourism businesses along our shorelines, both on Phuket island and the surrounding region. Over my 30 years in this industry, I’ve seen these businesses increase by 10 fold,” he said. “The Andaman is an open area. Some fish are born here, and some move into and through this sea from other areas,” he said. “If the sea becomes polluted from waste and human activity by those hotel businesses, the fish will disappear.”

“Before, the sea was full of plankton and naturally-occurring food for fish. Now, there is only farang feces and trash,” he added.

Mr Somyos complained that law enforcement and government officials should spend their time limiting the pollution and waste coming from hotel businesses in the Andaman, rather than limiting fishing seasons or restricting fishermen.

“Because of the Tier 3 human trafficking and illegal, unreported, unlicensed fishing vessels, our fishermen have been under a lot of government scrutiny. They keep blaming the human trafficking situation on fishermen and force Bangkok to impose a great number of strict laws regulating our industry,” Mr Somyos said.

On June 29, the United States issued its Trafficking In Persons report (TIP), which saw Thailand upgraded from Tier 3 status – the countries with the worst human trafficking records – to Tier 2.

The upgrade in status was controversial among human rights groups, including the Environmental Justice Foundation which published a 44-page exposé on the state of human trafficking in Thailand’s fishing industry last year.

Mr Somyos said the over-regulation of the industry has forced a majority of small fishing boat owners and operators to sell out, as fishing bans push them further out to sea, where bigger boats are needed for safety.

“Officials are not helping us. They’re actually putting more pressure on us,” he said. “Please, they need to understand that we’re losing our livelihoods and they need to help us,” Mr Somyos said.