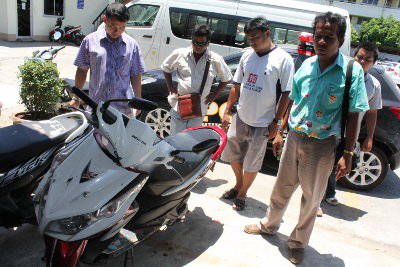 PHUKET: Following a public protest yesterday, Chalong Police will reopen their investigation into a traffic accident in which a 16-year-old boy died on Sunday.

About 20 people, including the aggrieved father, Sompong Sae-min, friends and family, gathered at Chalong Police Station at about 10am.

According to the police report, Weerachat Sae-min, a 16-year-old first-year commerce student at Phuket Technology College, died “as a result of his motorbike hitting a roadside power pole” near the PTT gas station south of Chalong Temple on Chao Fa West Road.

One of Weerachat’s friends survived the accident, and is now recovering from his injuries at Vachira Phuket Hospital.

Mr Sompong has refused to accept the results of the police investigation.

“First of all, my son’s friend said that my son did not die because he hit a power pole. He died because his head hit the road.

“He told me that a pickup truck cut them off, causing my son to lose control of the bike. That’s what caused them to fall on the ground and my son’s head to hit the road,” Mr Sompong said yesterday.

The police questioned the pickup driver, but let him go, saying that the driver had nothing to do with it, he alleged.

“I spoke with a witness, a motorbike taxi driver, who confirmed he saw a dent in the pickup, so he wrote down the license plate number. That’s how the police even knew which person to bring in for questioning about the accident,” Mr Sompong explained.

He added that if his son’s motorbike hit the power pole, the headlight would show some sign of damage. However, the only significant damage to the bike was a buckled front wheel.

Lt Col Boonlert of Chalong Police, the investigating officer in the case, told the Gazette, “We questioned the pickup driver, but the man was adamant that he did not hit the motorbike and we saw no signs of damage to his truck – no dents, no scratches – that would indicate it had been involved in an accident.

“Since we had no legal reason to hold him, we let him go,” he said.

“But now that we have heard from an independent eye-witness, we will investigate these claims by questioning the boy who survived the accident, and we will bring the pickup driver back in for more questioning,” Col Boonlert said.

“We will also contact the Phuket provincial branch of the Office of Forensic Science for assistance in our investigation,” he added.

“If we find evidence that the driver did cause the accident, we will press charges,” Col Boonlert said.

However, Col Boonlert did not name the driver and did not offer an explanation as to why police were now investigating further when they were aware of the independent eye-witness during their initial investigation.

Also, Mr Sompong did not confirm whether or not his son was wearing a helmet at the time of the accident or if he was carrying a valid motorbike driver’s license.

Phuket Live Wire: What exactly is this new 4G?