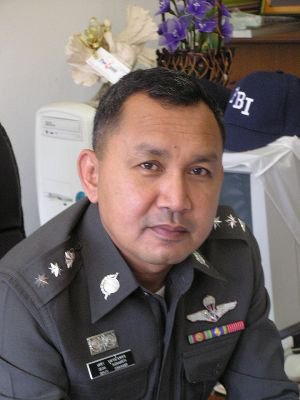 PHUKET TOWN: Phuket-based police officials who made up the core of the security detail for US President George Bush during the recent Apec summit in Bangkok are now back on the island. Phuket Provincial Police Deputy Commander Pol Col Decha Butnampetch, who was appointed chief of the “front line command center” to secure the US President, told the Gazette that the entire October 13-21 event had run smoothly and without incident. “We were proud to do this work,” Col Decha said. “Police from Phuket were chosen because of our past success [during the Apec Foreign Ministers meeting in September]. We have had more experience of this kind of work than police in Bangkok,” he said. He added that, of the 113-member security force, 62 officers were from Phuket, the remainder coming from other police barracks in the South. He said that officers were selected not only for their experience in security, but also for their superior English-language abilities. Col Decha explained that, of the 15 hotels hosting Apec leaders, his unit was given the most important assignment of all. “We were responsible for security at the Grand Hyatt Erawan hotel where George Bush, his wife and Secretary of State Colin Powell were staying,” he said. Although the officers found the work stressful, they welcomed the chance to gain experience by working together with their security counterparts from the US, where security has practically become a national obsession since the World Trade Center bombings in 2001. Col Decha said that whenever the US President left the hotel there would be throngs of people waiting to see him. On one occasion, he recounted, an officer noticed a suspicious-looking man. “We interrogated him for over three hours and searched his room at another hotel,” he said. “We saw from his passport that he was American. He said he came to Thailand as a tourist, and when he learned his President was coming to town he wanted to welcome him. “We were surprised that he wasn’t angry at us at all, and even thanked us for giving his President such good security,” he added. “Even after Apec, Phuket police will continue to stress security because there are always important people and tourists visiting Phuket,” he said.