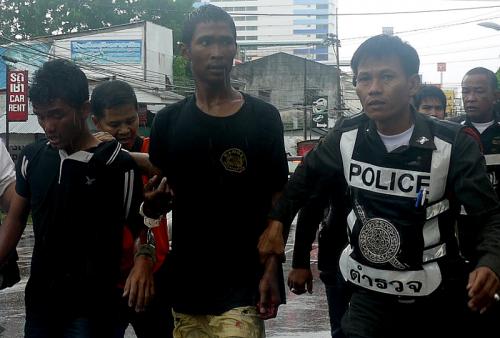 PHUKET: Police are waiting for fingerprint test results to determine whether the two yacht thieves arrested last weekend also carried out a knife attack on a Frenchman who disturbed the duo while they were trying to rob his yacht just two days earlier.

Niwat Duangmanee and Theeraphol Malasan, both 21, were charged with using knives to commit armed robbery, using a vehicle to evade police and receiving stolen property after a cat-and-mouse chase through Chalong Bay marina on April 26 that ended with police firing into the air and apprehending the men (story here).

The suspects, not willing to surrender, made a brazen escape attempt in Phuket Town in broad daylight the next day, attacking two police officers with a broken bottle (story here).

Both officers suffered deep cuts in apprehending the escapees, with one officer requiring 10 stitches to a cut on his face.

The two suspects were originally discovered after local yachtsman Capt Bruce Issell was notified by a silent alarm at about 11:30pm on April 26 that intruders had boarded the well-known Phuket catamaran DaVinci, prompting him to investigate.

“I was alone on the DaVinci Sunseeker 50 towing a dinghy behind and my fellow captain, Phayon ‘Nhu’ Phumthong, was in another dinghy. When the alarm went off we went to see what was happening and Capt Nhu saw people on the boat with a yellow dinghy tied up at the back,” Capt Issell explained.

“We called the police and I said to Capt Nhu just wait, stay away and watch them. Do not let them see you and if they leave, you can follow them from a long way behind – just watch where they go,” he said.

On seeing the two boats maneuvering around them, the thieves attacked the Sunseeker and attempted to climb into the dinghy trailing behind the luxury yacht in order to board the vessel and capture Capt Issell.

“They also tried to board the dinghy Capt Nhu was in, threatening him with knives,” he said.

A chase ensued around the moored yachts and commercial craft in the bay for some 20 minutes, with the Sunseeker ducking and weaving to hold off the raiders.

Police officers soon arrived in force on board a dinghy offered by a local dive company.

“They also threatened the officers with knives, taunting them to come on board their dinghy to fight,” Capt Issell explained.

In response to the threats, police fired two warning shots into the air.

“The bad boys did not have guns,” Capt Issell confirmed, correcting a witness report from the shore of Chalong Bay on the night of the event (story here).

Realizing they had no way to escape and that police were armed, the thieves surrendered and were brought ashore.

The suspects, Mr Niwat and Mr Theeraphol, have confessed to the charges of using knives to commit armed robbery and using a vehicle to evade police. However, they denied the charge of receiving stolen property, Sub Lt Kraisorn Boonprasop of the Chalong Police confirmed.

Capt Issell, present at Chalong Police Station when charges were pressed, told the Gazette that both men also confessed to police to taking ya bah (methamphetamine) and ya ice (crystal methamphetamine). Both men underwent urine tests for the drugs and both tested positive, he said.

Police also seized as evidence 11 knives the men were carrying, two underwater cameras, 20 coins packed in a plastic bag and a bright yellow dinghy with the Suzuki outboard attached to it.

“They did not have any guns,” Lt Kraisorn confirmed.

The next day, Mr Niwat and Mr Theeraphol attempted a brazen escape in broad daylight while being transported to Phuket Provincial Court in Phuket Town.

“When the transport pickup truck stopped at the Seng-Ho intersection on Montri Road, they kicked open the cage door at the rear of the vehicle and ran off into the nearby Bang Yai Canal,” Capt Nucharee Longkaew of the Phuket City Police explained.

“The suspects, still handcuffed together, smashed a bottle they found in the water and used it to attack the police,” Capt Nucharee said.

The officers moved in and bravely arrested the men, but not before Sgt Boonpob suffered a cut that required 10 stitches and Sgt Chaloem was slashed on the arm.

For their efforts, Mr Niwat and Mr Theeraphol both had attempting to escape custody and assaulting a police officer added to their list of charges.

During questioning, the pair confessed to committing one other yacht robbery before their arrest.

Lt Col Pongsakan Boonprakong of the Wichit Police told the Gazette his officers had yet to confirm whether or not the two men were the same thieves who terrorized the Baan Nit area off Cape Panwa the week before their arrest.

A Frenchman whose yacht was anchored off Ao Yon – where both Mr Niwat and Mr Theeraphol are well-known, long-term residents – was attacked by raiders two nights before the Chalong Bay arrests.

A scuffle broke out on board and the Frenchman suffered at least seven knife lacerations during the attack, including a cut on his head.

Fearing for his safety, the man did not return to sleep on his yacht the next night. It proved a prudent move as the thieves returned and made off with what was reported as a substantial bounty of yachting “removables”.

The yacht has been since moved from the area.

“At this stage, we have yet to have any evidence to link these two case,” Col Pongsakan said. “We have to wait for test results of fingerprints from the yacht to identify the suspects.”

Mr Niwit and Mr Theeraphol are both well-known as petty thieves among local residents in the Ao Yon and Ao Makham areas, Col Pongsakorn explained.

“Officers found many stolen items in their house, and now we have more victims in the area turning up at the police station to report stolen property,” he said.

“Police did not recover the computer notebook reported missing by the Frenchman and he cannot identify his attackers as it was very dark below deck when the attack happened,” Col Pongsakorn added.

The robbery attempt has not shaken Capt Bruce Issell’s faith in Phuket as an attractive destination for yachtsmen.

“It is not dangerous for yachts coming to Phuket. There have been many minor robberies over a long time. I think it is fantastic that the police caught some of the bad guys this time. It is the first time anybody in Chalong has been caught stealing like this and locked up,” he said.

“This is a big warning to everyone who is thinking about robbing a yacht. There are alarms on the boats and the police had the opportunity to come out onto the water to make the arrests – and they did so quickly.

“This is a good message for the yachting and bayside communities,” he added.

The two men were denied bail by the police, but it is now up to the Phuket Provincial Court to decide whether they can post bail or not, Capt Nucharee said.