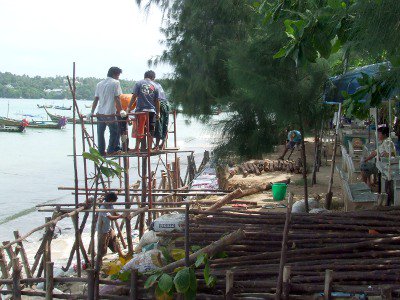 PHUKET: Restaurant owners along the Rawai beachfront on Phuket’s southern coast are racing to repair a collapsed section of the seawall and pavement before monsoon surf causes more damage.

The damaged section of the seawall spreads over about 100 meters and includes at least one privately owned restaurant.

Rawai Municipality has placed rocks along 60m of the waterfront to slow further erosion to the boardwalk.

Natawat Suksamran, 51, has run the Nong Pim 1 restaurant on the beachfront for seven years. He explained to the Phuket Gazette that this was the second time in a year that the wall had collapsed.

“I requested help from Rawai Municipality to build a permanent wall when it first collapsed but they never responded. I had to spend 50,000 baht making temporary repairs in front of my restaurant [that time],” Mr Natawat said.

Mr Natawat and his landlord together are paying for the temporary repairs to the Nong Pim 1’s 40m of beachfront.

About 60m of wall extending north from the restaurant is also damaged, causing a large sinkhole in the boardwalk, adding to conflict that began even before the coastal erosion sank its teeth into the promenade.

“We have been unable to fix the wall because a private company has complained that the area in question belongs to them,” said Somsong Sae-tang, Rawai Municipality’s ad-interim Engineering Director, declining to give the company’s name.

The owners of the restaurant next to Nong Pim 1 are contesting Rawai Municipality over rights to the land, Mr Natawat said.

Mr Somsong said that the issue was raised before the wall’s initial collapse when the “private company” sent a written request that the lights and boardwalk tiling be removed from their land.

“There are ongoing negotiations regarding the area [in question] and we have no right to fix the wall until the issue is resolved,” he added.

The Phuket Provincial Land Office had requested that Rawai Municipality inspect the area and determine who had rights over the land.

This was not possible due to part of the area being under the authority of the Phuket Highways Department, Mr Somsong explained.

An officer from each department would have be sent to assist in the inspection, he added.

Officials ‘slash and burn’ 25 tons of pirate goods in Phuket