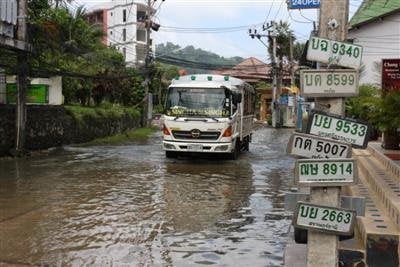 PATONG, PHUKET: As the monsoon season approaches, Patong residents fear that unusually prolonged flooding on a section of Nanai Road will only get worse.

Despite efforts by Patong Municipality to rectify the problem, the section of Nanai Road has remained permanently under three feet of water for the past few weeks. It has become such a constant fixture that local residents have nicknamed the stretch “Nanai River”.

US citizen Gary Robinson, who has lived in Patong for more than 10 years, said he had never seen an area of the town stay flooded for so long.

“They should set up a longtail ferry service,” he quipped.

The affected stretch runs roughly from the Aroonpat Village housing estate to the Chang Residence Hotel, though the size of the affected area varies with rainfall.

A local motorcycle taxi driver said the area has been flooded on and off since the week before the Songkran festival. The floodwater is partially comprised of raw sewage released by houses and shops on higher ground, he claimed.

Another agreed. “The water is very smelly and dirty. After touching it, you feel really itchy,” he said.

“The floodwater has no effect on humans. It’s not dirty water, it’s rainwater. The dirty water gets sent to another area,” he said.

Rainwater used to drain through the Aroonpat Village estate, through a section of private land and into a canal, Mr Teeranun said.

The owner of the private land had recently blocked the drains and this was what had caused the flooding, he claimed.

The municipality has been trying to remove the water using a pump, but with little success.

“They did put a pump up, but the pump is just obviously not adequate. It’s like using a cup to bail out the Titanic,” Mr Robinson said.

Mr Teeranun said the pump is now broken, but that plans are afoot to buy two more “as soon as possible”.

The municipality has plans to solve the problem on a more long-term basis by raising the road and drainage channel beneath it by about 60 centimeters. This will channel rainwater to part of the local drainage network and thus prevent flooding, he said.

The plan would cost from five to six million baht and take three or four months to implement, he said.

Mr Teeranun admitted that an urgent solution was needed.

“It’s close to the rainy season. We have to solve this problem as soon as possible,” he said.

Gary Robinson agrees. “We could easily get two days of heavy rain. If we get that, the whole thing is going to get really crazy,” he said.