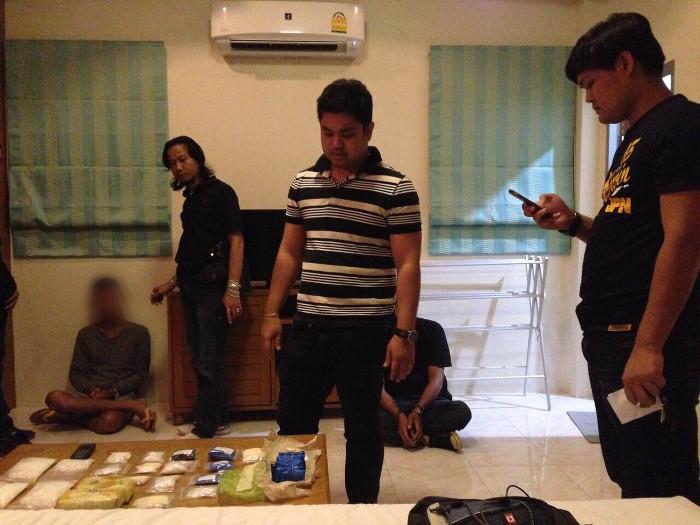 PHUKET: Phuket Provincial Police today announced the arrests of four men and two women for narcotics offences, in the latest illegal drug crackdown in the province.

Yuttana Sulsabai, 48, was caught at his house in Tah Chat Chai in possession of 35 amphetamine (ya bah) pills last Tuesday. Police charged him with possession and intent to sell the illicit drugs.

Three men were arrested in the Chalong area on Thursday, including a 24-year-old man previously indicted for possession of category 1 drugs in January 2014. This time he was caught with less than half a gram (0.48g) of crystal methamphetamine (ya ice).

Later that day, 25-year-old Charin Innoom was caught with 1.08 grams of ya ice and 110 ya bah pills stashed at his residence. He was charged with possession of a category 1 drug with intent to sell.

About 11pm, police arrested Tirawat Thongkerd, 21, at his home in possession of 507.45 grams of ya ice and 7,000 ya bah pills. He was also charged for possession of category 1 narcotics with intent to sell.

On Friday, Phuket City Police arrested an 18-year-old female who had two ya bah pills on her. She was charged with possession of category 1 drugs.

Another suspect, Prakaikaew Tantai, 30, who was already wanted for previous category 1 drug offences, was arrested at 10pm that evening.