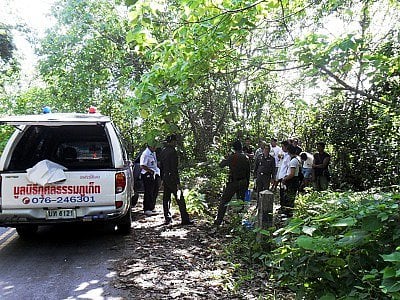 PHUKET: The partially decapitated body of an unidentified man was discovered in a Phuket rubber plantation this morning.

The victim’s completely severed right hand was found near the body, which was discovered on Koh Sireh in Rassada by a Burmese rubber tapper.

Phuket City Police led by Charoon Plaiduang estimated the age of the victim at 40 to 45.

There was no evidence to indicate whether the victim was Thai or Burmese.

Burmese living in the area number in the thousands, many working out of the nearby fishing port or on rubber plantations.

However, local Burmese plantation workers and Thai residents questioned so far have not been able to identify the victim.

Lt Col Charoon said he expected the man was killed elsewhere and his body dumped in the remote location.

Anyone with information that might aid in identifying the man and bringing his killer to justice is encouraged to call Phuket City Police at 076-216856.

Police yet to question crew over Phuket diver death