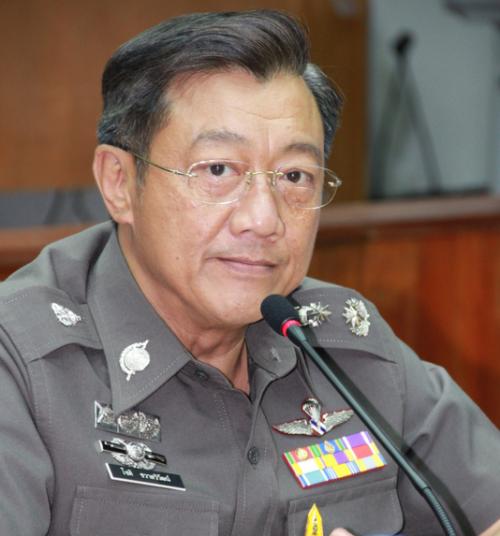 PHUKET: One of the two survivors of the gunfight on March 20, which left two dead and a Tourist Police officer charged with murder, has given police his version of the shooting but has not identified the shooter.

Natthapong Kaewkuanchum, 25, was shot three times in the chest in the early morning of March 20, and is in the surgical ward at Vachira Phuket Hospital.

Phuket City Police investigators questioned him about what transpired in the room at the Phuket Garden Ville housing estate early on the morning of March 20 (story here).

“He told us that on that night he was sleeping in the room when a loud bang woke him up. As he was getting up, he was shot,” Phuket City Police chief Col Sermphan Sirikong told the Phuket Gazette.

“We asked who shot him. He did not answer. We showed him a picture of Sen Sgt Maj Pinchai and asked whether he was the shooter.”

“Mr Natthapong thought for a while and then closed his eyes. He did not answer our question,” Col Sermphan said.

“We did not ask him any more questions about the incident, such as why he was in the room or what his friends were doing before they were shot.

“We did not ask because we noticed he was not ready. He looked very tired and was still in bad condition,” he explained.

“We have to come back to question him later when he has recovered more,” he stated.

The other survivor, Sen Sgt Maj Pinchai Piyadilok of the Tourist Police, was shot in the stomach and leg during the gunfight and transferred to Prince of Songkla University Hospital in Haad Yai, where his wounded leg was amputated (story here).

“Our officers will question him soon,” Col Sermphan said.

On March 21, the day after the shootings, Sgt Pinchai was charged with murder “as a precaution”, Col Sermphan told the Gazette, adding, “He has been charged because we believe that he was somehow involved in the incident, but at this stage we just don’t know how.”

Nearly a week later, the police are still unsure what transpired when Sgt Pinchai entered his neighbor’s room.

“We need to investigate further before determining who is right and who is wrong… For example, maybe Sen Sgt Maj Pinchai entered the room and saw those people using drugs. If he ordered them to stop and they stopped but he still shot them, then he was certainly wrong.

“However, if he ordered them to stop but they did not and tried fighting back, then he might have been trying to protect himself. If this was the case, he might not be in the wrong,” Col Yotsavee explained.

When contacted by the Gazette, Phuket’s top-ranking police officer, Provincial Commander Choti Chavalviwat, acknowledged that Sgt Pinchai had been charged with murder and attempted murder, but said the survivors could not currently be questioned.

“Sgt Pinchai and Mr Natthapong are not in good enough condition to give us their statements now. We have to question them again later,” Maj Gen Choti said.

“We will be fair to each side,” he stated.

“Every policeman is expected to be able to control his temper in terms of gun use. He must realize that he is a law protector, not a law breaker. The most important duty of a policeman is to obey the law,” he said.