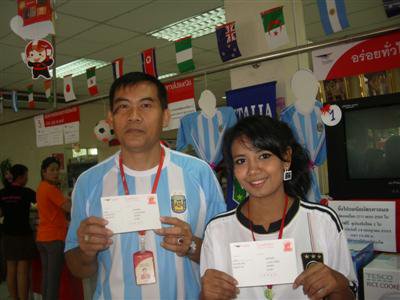 PHUKET: If you have business at the post office, here’s a tip: don’t wait until the last few days before the World Cup Final to get it done because the snail mail centers are likely to become beehives buzzing with activity as millions of Thais descend upon them to send off postcards as part of a 40-million-baht World Cup sweepstakes.

A total of over 40 million baht will go to some of those who correctly predict the winning side:

Other smaller prizes will bring the total payout over the 40 million mark.

The reason for the anticipated crush is that contestants will have until the post offices close on July 10, the day before the final, to pick their winner – hardly an incentive to get the postcards in early.

In addition to the nationwide sweepstakes, Thailand Post is running spin-off lucky draws at the provincial level.

Those who buy packs of 200 two-baht postcards will be given a coupon to participate in a provincial lucky draw with a top prize of four million baht.

A wide range of other prizes will also be up for grabs, including many electrical appliances now on display at the Phuket Provincial Post Office in Phuket Town.

The lucky draw will be held on July 14 and winners will be contacted at a later date.

At post offices in Phuket alone, 1.1 million postcards will be on sale.

To make the process as user-friendly as possible, the cards have been pre-postmarked and pre-addressed to the offices of Thai Rath, Thailand’s best selling newspaper.

All contestants need to do is provide their name, address, contact details and the name of the team they expect to take it all (e,g., USA). This gives about a 50:50 chance to those with enough common sense to wait until after all the semifinal matches are decided to send off their cards.

To get everyone in the spirit, postal workers are now garbed out in the kits of various teams deemed capable of winning by Thailand Post.

Foreigners hoping to join in the gold rush will be disappointed, however: the sweepstakes is open only to Thai nationals. Thai Rath employees are also excluded.

“I hope everyone enjoys the matches and remembers to take part in this promotion…. For me, I am keeping my eyes on Spain,” Mr Boonrath said.

The Gazette‘s interview with Mr Boonluechai was conducted prior to Spain’s dismal 1-0 loss to Switzerland.