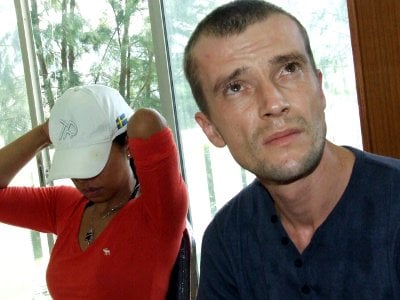 PHUKET: A Russian man was arrested by Kamala Police yesterday on suspicion of robbing several homes during the festive holidays.

The 35-year-old, Pavel Zhuravlev, was arrested at 3am at a house where he was staying on Soi Massayid Naka in Kamala.

He was found in possession of 800 milligrams of ya ice (methamphetamine) and drug-taking paraphernalia, as well as many items that police suspect were stolen, police announced today at a press conference.

“We tracked him down by following the signal from a Mac notebook, that was stolen in Chalong,” said Kamala Police Superintendent Nathapakin Kwanchaipruek.

Mr Zhuravlev was charged with the possession and use of drugs, robbery and is also looking to face overstay charges once his visa status has been confirmed by the Phuket Immigration Office.

One victim has already stepped forward and identified a Mac Air notebook, two 3G iPads, a watch, a driver’s license and a mobile phone as his.

Mr Zhuravlev confessed that he broke into the victim’s house in Chalong on December 24 at about 7am, said police.

The rest of the items seized in the raid, such as bags, mobile phones, cameras and binoculars, Mr Zhuravlev said belonged to him.

Police said that they were skeptical and planned to continue their investigation of both him and his partner Mathurin Sophapol, 29.

Ms Mathurin tested positive in a drug test and will be charged with using drugs.

Currently police are looking for more people to step forward and identify their belongings.

A Swedish woman whose home in Patong was broken into on December 7 was summoned to the press conference to identify whether or not Zhuravlev was one of the thieves that broke into her home.

She told the Gazette, “When we woke up in the morning we found the window on the ground floor had been forced open and many things were gone, such as a Mac Air notebook, our mobile phones and a watch.

“From the CCTV camera in the house we were able to see that two foreign men broke in at about 3am while we were sleeping on the first floor. Over 200,000 baht of things were stolen,” she said.

The Swedish woman tried to identify the items stolen from her house, but didn’t find any until she noticed a white watch Mathurin was wearing, which she said was hers.

Ms Mathurin said Mr Zhuravlev gave the watch to her. However, the Swedish woman was unable to positively identify Mathurin based on the CCTV footage of the break-in.

The pair were due to be charged in court this afternoon.

“If they seek bail, we will ask the court to deny their request,” said Col Nathapakin of Kamala Police.