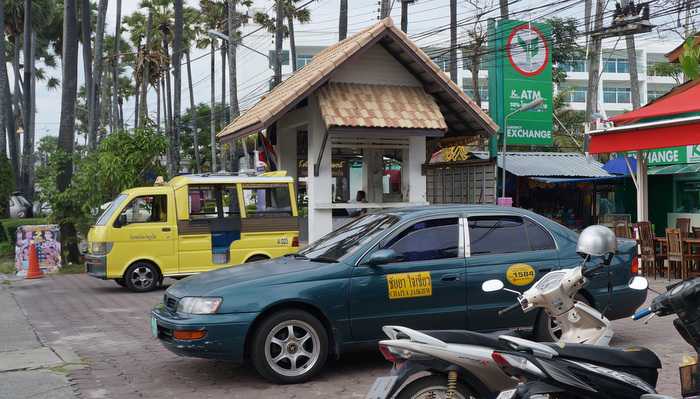 PHUKET: Police have defended their actions in a raid that saw officers and military personal, clad in flak jackets and carrying assault rifles, besiege an illegal Phuket taxi carrying a family of foreign tourists.

“We flagged down a taxi with the assistance of the security guard in front of our hotel at Karon Beach. The driver agreed to take us [to Patong] for 300 baht,” David Bowyer said, with his wife, Cheryl, sitting next to him.

“When we arrived at Hooters, we were suddenly surrounded by 10 scary-looking police in flak jackets shouting in Thai. We thought we had been arrested. They asked us to get back into the taxi and have the driver drive us to the police station [Soi Bangla police box],” Mr Bowyer said.

The family protested about being under police escort: “We said no – we have two young children in strollers. One of the policemen agreed to ride in front with the driver, but we felt like we had no choice. I was willing to pay 1,000 baht just to get out of there.”

“They interviewed us and wanted to know where the taxi had picked us up and how much we paid. They asked for my passport, but I wasn’t carrying it, so I gave them my driver’s license which they photocopied. They ordered us around like criminals. They wanted a picture of me pointing at the driver, handing the driver money. They asked me to sign things I didn’t understand.”

Among the family’s chief concerns was that they could not understand anything the officers involved in the arrest were saying.

The whole episode took about an hour.

“It was really intimidating. Afterward, they asked us if we wanted another taxi to take us back to Hooters,” Mr Bowyer said.

“We said, ‘No way’. We really don’t want to ever use another taxi in Phuket.”

After their forced role as witnesses, the family walked back to Hooters – while pushing two infants in strollers – to continue their holiday.

Patong Police Traffic Inspector Ekkarat Plaiduang told the Phuket Gazette that it was standard practice to have English-speaking officers present when foreigners were involved in police affairs.

“We normally have Tourist Police officers who can speak English present during such raids, and we often call in Tourist Police volunteers to help us when we need them,” he said.

“Foreigners are supposed to be provided with translators to explain what is going on. In this case, there might have been a mistake, maybe the officials were caught up in the rush during the arrest.”

Although there is no time limit on how long police may hold witnesses – including tourists – in order to record their statements, Maj Ekkarat said that officers try their best to complete the process as quickly as possible.

“We understand that it wastes people’s time, but when you are involved in any such situations, please co-operate with the police and we will make sure translators are provided,” he said.

“If you do not see any officers who can speak English, please ask for one – you can even call your friends. You have the right to have a translator with you.”

Maj Ekkarat urged tourists to use only legal taxis, and called for all hotels to provide notices in guest rooms showing what legal taxis look like, as a way of curtailing illegal services.

“Please only use taxis with either green or yellow plates, which indicate they are registered public transportation vehicles,” he said.

“If you keep using illegal taxis, the drivers will be encouraged by the demand and keep on working illegally.”

Maj Ekkarat firmly believes that with no demand for the illegal taxis, there will be no supply.

“We have called in hotel operators in Patong to make sure that they place guides in each hotel room showing tourists which taxis to use. I hope other areas are pushing it too,” he said.

Meanwhile, tourists and residents should be prepared to see snap raids on taxi drivers continue.

“We are out looking to arrest illegal taxi drivers every day to make sure we get rid of them,” Maj Ekkarat said.

“I believe there are only 20 illegal drivers left in Patong – we will get them all.”