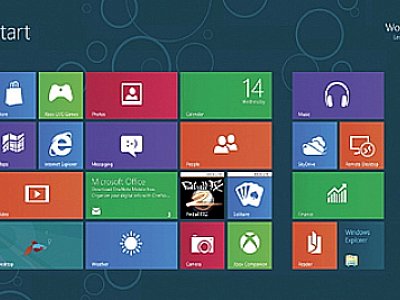 PHUKET: I have spent two of the past three Live Wire columns extolling the virtues of Apple products. A few of my friends were shocked. After all, I’m a dyed-in-the-wool PC user. I’ve written many dozens of books about Windows and Office, and thousands of articles. Windows is like an old security blanket to me. Sparring partner, too. And it’s changing. Dramatically. Right now.

Three weeks ago, Microsoft released the “Consumer Preview” version of Windows 8. You can download and install it, too, if you’re curious and you have an extra PC and a 16 GB USB drive – follow the instructions at: is.gd/5Wh482. Yes, you can install it dual boot, if you’re adventurous, and you can install it on a virtual machine, either on Windows or on the Mac.

Windows 8’s primary distinguishing factor is the “Metro Start screen”, which you can see in the image above. When you start Windows, this is what you see – a screen that looks like it came straight from a Windows phone. If you want to bring up the old Windows desktop – Microsoft calls it the “Legacy Desktop”, a term that sends shivers down my spine – you have to tap or click on the tile that says Desktop, there in the lower left corner.

Microsoft dropped the Start button, over on the Legacy Desktop, and there’s no Start Menu anymore, either. If you want to use the Start Menu, you have to drop back to the Metro Start screen, and punt. It’s quite disconcerting, at least for the first hour or two.

Windows 8 isn’t going to replace Windows 7 on a whole lot of desktops. Not for consumers. Not for companies. It will be useful for people who buy new tablet computers – if you get a new tablet and you really want to be able to run your old Windows programs, Windows 8 is for you. It’ll be moderately interesting to some Windows 7 desktop and laptop users, because it does have a few worthwhile new features. But with those few exceptions, I can just about guarantee that you won’t be chomping at the bit to download and install the new Windows.

I’ve written several extensive reviews of the Windows 8 Consumer Preview. If you’re just coming up to speed on it, start with my Windows Secrets Newsletter Top Story, “A Windows Veteran Looks at Win8 Consumer Preview”.

Microsoft knows that it won’t convince many Windows 7 users to upgrade to Windows 8. That isn’t really their intent right now. Instead, they’re trying to offer a product that will compete with the iPad, to slow down the mass onslaught of iPads in companies and among consumers. In the process, they’ve created Windows 8 as kind of a beachhead, to get things rolling with a completely new way of looking at Windows.

Why? As I’ve explained before in these columns, the Windows that we know is stagnating. Sales are off, and they aren’t going to surge ahead any time soon, in spite of what you may have read from industry analysts and financial commentators. Windows 8 may go down as uninspiring in terms of sales, but at least it’ll give Microsoft a chance to get into the tablet market. And as much as this disappoints my friends, who will be running XP until they snatch it from their cold, curled fingers – tablets are very much the future of most kinds of computing.

No, you won’t be able to calculate the national debt on a tablet, or write a book, or do extravagant Photoshop projects or create Autocad portfolios. But you will be able to send and receive email, go onto the web, feed Facebook directly, run Skype, edit photos (to a layman’s satisfaction), patch together videos, even edit Autocad drawings (yes, Autocad has an iPad app, and they’ll undoubtedly make one for Win8, too).

Games? Used to be that gamers had to shell out a ton of money for the gizmos to run their favorite pastime. Really intricate games will always require expensive hardware. But if you look at the tablet games that are coming out for the new iPad, with that better-than-high-definition screen, you can see they’re remarkable – and they’re going to get better.

In other words, 90% of the stuff that 80% of the people do with a computer, runs just fine on a tablet. So why put up with all the hassles of running Windows on a piece of iron that weighs more than your refrigerator, and breaks down twice as often? Maybe you’re addicted to blue screens and frozen mice. Or maybe you’re ready to leave it all behind and tap your way to something new.

Former Microsoft General Manager and Distinguished Engineer Hal Berenson said it best: “Consumers increasingly reject the old experiences in both their personal and work lives. For the 20-something and under crowd, the current Windows desktop experience is about as attractive as the thought of visiting a 19th Century dentist.”

So where does that leave those of us who need our PCs? Surprisingly, we’re in pretty good shape. Windows XP lasted a good ten years. (The first version came out in 2001.) Chances are good that Windows 7 will match that record, and possibly beat it.

If you subscribe to the “every other version of Windows sucks” theory – Windows 98 was great; Windows Me was the pits; Windows XP rocked; Windows Vista stank; Windows 7 rules – then it’s entirely possible Windows 8 will be worthy of all the scorn it’s starting to gather, but Windows 9 will lift the old brand to new heights. If we ever seen a Windows 9.

If you like your desktop, I strongly suggest you get a genuine copy of Windows 7 Home Premium and install it on whatever machines you want to keep for the duration. (Amazon in the US still lists 3-packs of Windows 7 Home Premium for $160 with free shipping to a friend in the US. That’s a tremendous price for a piece of software that’ll last you another 10 years.) Hook up Microsoft Security Essentials, and you’ve got all of the Windows and anti-malware you need. Toss in a copy of Firefox or Google Chrome, and you’re ready to surf to your heart’s content.

As a matter of fact, that’s good advice even if you expect to get a tablet in the not-too-distant future.

With Woody hunkered down writing yet another book, the weekly Computer Clinics are taking a new turn. Until he emerges with an 860-page copy of “Windows 8 All-In-One For Dummies” under his arm, around May or June, Seth Bareiss will hold computer sessions every-other Wednesday afternoon, from 1 to 3pm. If you have a Windows problem that needs to be solved, drop by one of Seth’s free afternoon sessions at the Sandwich Shoppes. Details in the Phuket Gazette Events Calendar.