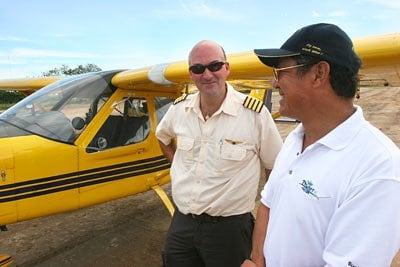 PHUKET (PA KHLOK): Phuket’s first-ever Fly-in starts tomorrow with ten aircraft scheduled to take part in a weekend of celebrations, games, contests and aerial stunts to mark the grand opening of Phuket Airpark. About 50 pilots from at least a score of nations are expected to be on hand, among them world-renowned American bush pilot Tom Claytor who flew in earlier this week.

The Airpark is situated on a 100 rai plot of grazing land in Pa Khlok. Its 500-meter grass strip shares the beautiful tree-lined pasture with a herd of buffalo, a happy partnership which has led Airpark founder Robert Suchard to honor his new baby with the nickname Toong Kwai Bin – southern Thai for ‘Flying Buffalo Field’.

The Airpark is open to the public from 8am tomorrow through Sunday afternoon. The day starts with Muslim and Buddhist blessing ceremonies, followed by spot landing and ‘flour bombing’ contests, hot air balloon rides, a paramotor flying show, and a traction kiting exhibition by a team of ten aficionados. (An extreme sport, traction kiting is defined by its devotees as “kite surfing on land”.)

To find all of this action, simply drive to the Heroines Monument, take highway 4027 east (toward Cape Yamu) for 6.3 kilometers, and turn right into the airport. Be alert for low flying aircraft… and buffalo.

The Fly-In has been organized by the Airpark’s management and is sponsored by the Absolute property group, Kingfisher beer, and the Phuket Gazette. There will be plenty of photo opportunities and a planeload of prizes for the winners and runners-up in the many contests throughout the weekend.