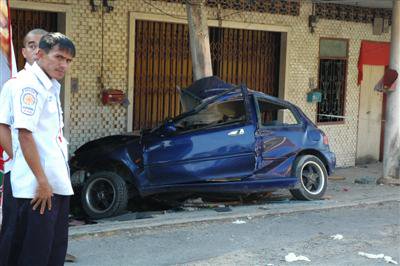 KOH KAEW, PHUKET: A 32-year-old man was killed yesterday when he lost control of his car at a bend on Thepkrasattri Rd in Sapam and crashed into the support pillar of a roadside home.

Taweewat Sitti, a 32-year-old engineer from Nakhon Sri Thammarat, was driving along Thepkrassatri Rd towards Phuket City at high speed at the time of the accident, approximately 4 pm.

His Honda Civic skidded into the support pillar, causing it to almost collapse but saving the house behind it from serious damage.

Rescue workers from the Kusoldharm Foundation tried to move Mr Taweewat out of the vehicle, but were unable to free him before he died of a broken neck.