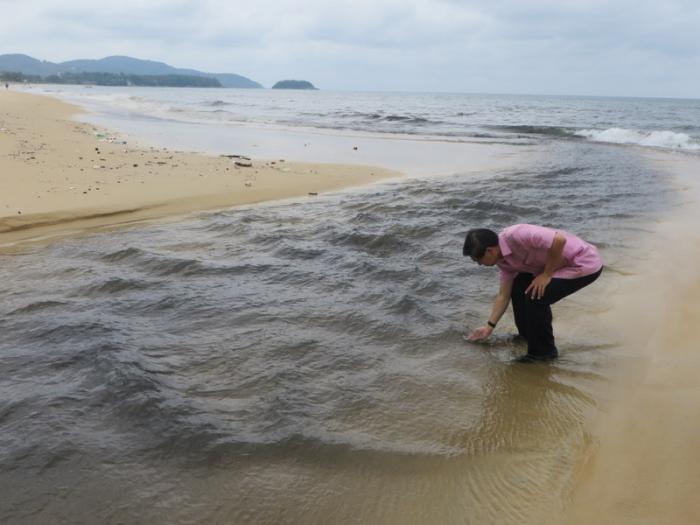 PHUKET: The Phuket governor was on-site yesterday when a fresh flow of black water washed into the sea at Karon Beach.

Governor Maitri Inthusut happened to be on location to lead an investigation into black water and lines of trash that plagued the beach on Friday (story here).

The governor denied that wastewater was the cause of the black water yesterday, but confirmed its presence in the water on March 28.

“Despite its dark color, the water today is not wastewater. However, the contaminated water on March 28 was found to be caused by a broken wastewater pipe,” he said.

Governor Maitri said that the black water yesterday was due to sediment in the Nong Han Canal being stirred up by recent rain.

“The heavy rain caused the water levels to rise. The sediment mixed with the water and washed into the sea,” he explained.

Governor Maitri demonstrated the safety and cleanliness of the water by washing his hands and arms in it, as he did in February when dark water flowed onto the beach (story here).

“My short-term solution is to dredge the Nong Han Canal, from the water pump station to the beach. This should take about three days to complete. We will also install a net at the canal’s water gate to catch garbage,” he said.

“The long-term plan is to dig steps into the land along the canal that will catch sediment and slow it from reaching the water. Additionally, I would like to build an emergency treatment pond.”

The emergency pond will serve as a back-up and will only operate if the main treatment plant is overflowing or wastewater pipes have broken.

Gov Maitri called on local officials and residents to help in the mission, despite Karon Municipality signing Memorandum of Understanding (MoU) to temporarily relinquish control of wastewater management in the area to the Wastewater Management Authority of Thailand (WMA) (story here).

“We need help from officials and residents to resolve these issues. Next Tuesday, at 7:30pm, I will hold a conference with Karon residents and officials to discuss the situation and how everyone can help to fix it.”