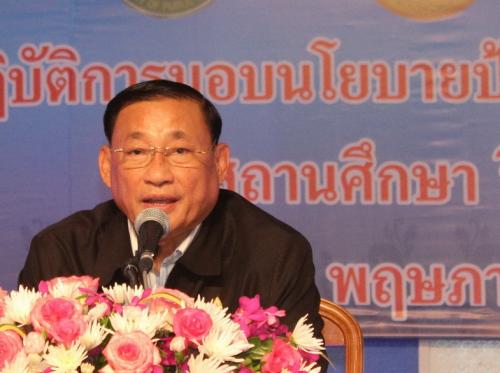 PHUKET: Three schools in Phuket yesterday became the launch focus of a new Ministry of Education campaign to rid schools nationwide of drugs.

Mr Sermsak explained that tackling drugs in schools had been given high priority by the ministry and that achieving that goal required the effort of every level of official in the schooling system.

“The ministry’s project is to create ‘White Educational Institutions’ free of drugs. In order to achieve that, we need cooperation from every section, especially from homeroom teachers who are closest to the students,” said Mr Sermsak.

Practical action plans and assessments have been set to be carried out throughout the school year.

Within seven days after each semester starts, every school has to report to the ministry the number of students found or believed to be involved with drugs, including users, dealers and potential drug users or dealers.

“All such information will be kept confidential so that students and schools will not be adversely affected,” Mr Sermsak said.

The goal is to rehabilitate those affected, with the local Provincial Public Health Office in charge of provided treatment programs for students, he explained.

From the set action plan, provincial health offices across the country will launch their rehabilitation programs on June 15.

Schools must also set up their own measures to help students who are potential drug users or dealers, Mr Sermsak added.

The ministry will be sending inspectors to evaluate each school. If the school is deemed ‘white’, it will receive a white pennant as a declaration that school is 100 per cent drug-free.

“The main objective of this project is to rehabilitate students involved in drugs. Our victory lays in bringing those students back to their families and their academic careers,” Mr Sermsak explained.

“The Thai government has set a target of providing rehabilitation to 300,000 drug users this year. So far about 100,000 have received treatment. The Ministry of Education wants to play a part in the government achieving that goal,” he concluded.

After the rolling out the new policy, Mr Sermsak inspected Baan Bang Tao and Muang Thalang Schools in central and west coast Phuket.