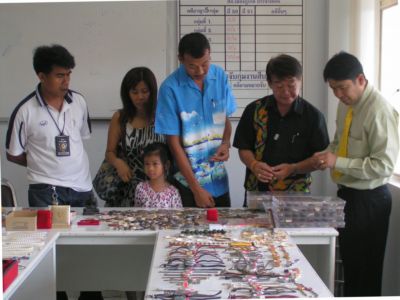 PHUKET CITY: Phuket City police have arrested a serial thief charged with breaking into 14 homes in Wichit and Chalong during a crime spree that began in mid-2007.

Noppakhun, who by day worked grooming dogs at a pet shop in Phuket Villa 3, was presented to media along with more than 1,000 stolen items recovered by police.

The booty included jewelry, mobile phones and bank notes in a variety of denominations. Most of the recovered goods were fake or low-quality items that the suspect probably had trouble selling off, Lt Col Wijak said.

He told the Gazette that the suspect was very active over the Songkran holiday, when six break-ins were reported – all at Jomthong Thani on Kwang Rd and Phuket Villa 3 off Chao Fa East Rd, both in Wichit.

The big break in the investigation came when the suspect was caught on a CCTV camera while withdrawing money from an ATM machine with a stolen card.

The owner of the ATM card, Phuket Villa 3 resident Rattawipa Chantawat, told police on April 20 that her home had been burgled while she and her family were out of town for the Sonkgran holidays.

When she checked her account at Thanachart Bank, she realized that 104,900 baht had been withdrawn.

K. Rattawipa told police that the ATM card and its PIN code were left together inside the home while she was away.

She identified K. Noppakhun, a fellow resident of Phuket Villa 3, when viewing CCTV footage of him making an ATM withdrawal.

After being arrested at his home at 1 am the next day, the suspect confessed to burgling K. Rattawipa’s home and 14 others since the middle of last year, police said.

After watching homes to learn their occupants’ routines, the suspect forced his way in at night using a screwdriver, Lt Col Wijak said.

Although the the suspect claims to have worked alone, the number of items recovered has led police to believe he may have had an accomplice, he added.

After the press conference, homeowners were invited to identify and reclaim their stolen belongings.

Among them was Phuket Provincial Livestock Office Chief Sunart Wongchavalit, who lost many valuable items, including gold Buddha image amulets, during a break-in in November.

Police continue to investigate and the suspect faces several charges of vandalism, trespass and burglary-by-night.

Divers help out on Earth Day