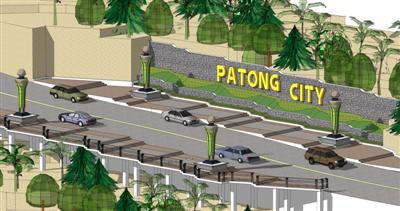 PHUKET: Work is underway on a nine-million-baht sign welcoming motorists to Patong.

Patong Mayor Pian Keesin said the sign, meant to mark the border between Kathu and Patong, is destined to become a famous Patong landmark.

Construction started on April 9 and is scheduled to finish by September 5.

When completed, the new sign will feature the words “Patong City” in two-meter-high letters on a cliff face along the eastbound lane of the Patong Hill road, about 100 meters uphill from the shooting range.

Already under construction across the street is a walkway area and lookout point that will be 4.5 meters wide and 60 meters long when completed.

Workers building concrete forms must exercise extreme caution at the hillside construction site, which has a steep drop-off on one side and traffic along one of Phuket’s most dangerous stretches of road on the other.

Those aren’t the only dangers. A project engineer at the site suffered a powerful electric shock requiring hospital treatment, a source told the Gazette.

If all goes according to plan, the lookout will one day afford views of the entrance to the 2.2-billion-baht traffic tunnel Patong Municipality wants to bore beneath the hill to make the commute between Patong and Kathu easier.

Those wishing to enjoy the view will have to do some legwork however, as there will be no room for parking along the road.

Four six-meter tall lighted pillars will illuminate the sign at night. Each will be be crowned with a large white ball spinning in water, an allusion to Phuket’s reputation as “The Pearl of the Andaman”.

The pillars will be decorated with large replica banana leaves made of stone.

Patong Municipality Public Works Division chief architect Supasis Utairat said the banana leaves were to represent the banana trees that were once abundant along Patong Beach – before it was developed for tourism.

As the land boundary between tambons Kathu and Patong is at the top of Patong Hill, near the Chinese shrine, the Gazette asked a foreman at the site why the sign will be located in tambon Kathu, not Patong.

The foreman said the road, but not the land around it, has already been consigned to Patong Municipality.

Geographical precision does not appear to be a major concern among some business operators in the area, however.

Two important tourist attractions located nearby, the Patong Shooting Range and the Patong Go-Kart Speedway, are both located in tambon Kathu, not Patong.