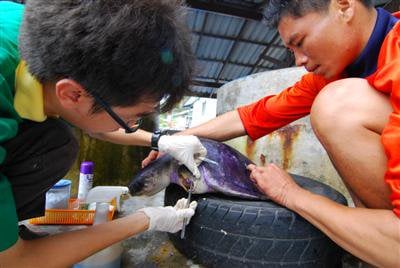 CAPE PANWA: An immature Olive Ridley sea turtle whose badly infected front left flipper had to be amputated by veterinarians at the Phuket Marine Biological Center (PMBC) in early June is recovering well at the center, where it is eating well on a diet of fish and squid.

Named Hope by members of the Mai Khao Sea Turtle Foundation that rescued the turtle, the 13-kilogram turtle is thought to be about 10 years old. Its injuries are likely the result of an encounter with fishing equipment.

Whether or not Hope is a male or female has yet to be determined. Gender classification in the species is usually only reliable when they reach maturity at about 15 – 20 years of age, at which time the tails of males begin to grow longer than those of their female counterparts.

PMBC veterinarian Sontaya Manawattana said he suspects Hope is a female, but that it is still too early to say for sure.

Found washed up on Mai Khao Beach last month, Hope is having trouble relearning how to swim with just three flippers.

She gets stressed out when handled by people, but feeds well when left alone.

“Her wounds have healed well and she has a great appetite. Her only problem is buoyancy. We would say the odds for her to be able to swim normally and be released is fifty-fifty. We will know the outcome in a few months,” K. Sontaya said.

In a related story, a 75-kilogram green sea turtle rescued off Koh Rayatot Yai in Satun in early June is also recovering in a PMBC tank and is almost fully healed with no buoyancy problems.

‘Siu’, named after a veterinarian who helped K. Sontaya perform her flipperectomy, was found pierced with five fishhooks and tightly ensnared by netting that had cut off circulation to her right front flipper, allowing infection to set in.

The PMBC vets plan to release Siu into the waters where she was found in a few months’ time, he said.