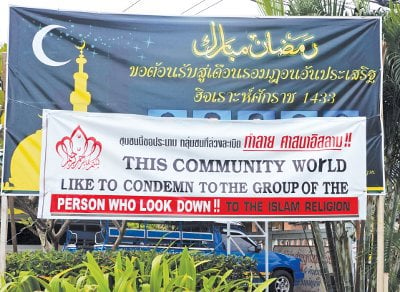 PHUKET: Seven banners have appeared in Rawai in front of Muslim shops, houses and even a mosque. The English words dominating the banners are jarring to many. However, the Thai translation and the meaning behind the signs tells a very different story. The Phuket Gazette‘s Chaiyot Yongcharoenchai reports.

The signs appeared overnight in a Rawai Muslim community with script reading in three languages: Arabic, Thai and English.

The subtlety and nuances of words has always taken certain artistry to accurately capture an idea, a feeling or a reaction. Nowhere is a deep understanding of the nuisance of tone needed more than when translating sensitive text, be it personal, political or religious.

However, the English message on the sign reads: ‘THIS COMMUNITY WOULD LIKE TO CONDEMN TO THE GROUP OF THE PERSON WHO LOOK DOWN !! TO THE ISLAM RELIGION.’

However, an accurate translation from the Thai written on the banner reads closer to, “This community appeals for the admonishment of people who destroy our religion.”

“The person who made these signs does live in our community,” said Imam Pramote Chockgua, who heads the Masjid Nuruddee Neeyah in Rawai and has one of the seven banners in front of his mosque. “He consulted with us before printing them and posting them in the community. I told him that it was okay to make them as long as they don’t cause any harm,”

Imam Pramote said that the signs had nothing to do with the recent Arab Spring, confirming that they were in protest of the misinterpretation of Muslims in the recent YouTube film Innocence of Muslims, which has been a catalyst for violent attacks on American nationals and interests across the world.

“The images in the movie made Muslims look really bad. If we just ignore it, it would be like admitting that the movie’s portrayal of us was accurate. That is why the signs were made, to show that we disagree with the movie’s content,” he explained.

“We are living in a democratic country and have the right to express our opinion. We don’t want anyone to treat us differently or unfairly,” he added.

However, Imam Pramote was concerned about the tone of the English words on the sign, which is harsher than what is written in Arabic and Thai.

“When the person who made the signs came to talk with us, we all helped him put the words together. Arabic and Thai are our native languages, but we didn’t have any language experts to help us with the English, which is probably why it is a bit too strong.

“We don’t really know the hidden meanings of the words in English. We just looked them up in a Thai-English dictionary and used whatever words came up,” he admitted.

“I had no idea that the English meaning was so strong and maybe considered offensive,” he added.

Imam Pramote explained that he had no desire to cause additional conflicts with the signs, but rather wanted to protect the dignity of the Muslims in the community.

IN THE PUBLIC EYE
A restaurant across from the large Tesco Lotus south of Chalong Circle has one of the seven posters over its entrance. The Gazette tried to interviewed several people at Tesco Lotus, in clear sight of the sign.

Three of them declined to comment on the issue.

However, Esa Boonmalert, a 44-year-old Muslim living in Rawai, explained that it was a personal right to hang the signs, but for him the best way to combat the portrayal of Muslims in the film was simply to be a good, faithful Muslim.

“Though the moviemakers created negative images of Muslims, I still don’t consider them bad people. They are just ignorant of what Islam really is. What is worse are Muslims that don’t practice their own religion,” Mr Esa said.

“Those who don’t really understand Muslim principles are not the ones who should be blamed. Muslims that ignore all the principles and practices are really the ones destroying our religion.

“I have seen many Muslims in other countries strike back violently, and I personally think it was the wrong reaction.

“The best way to solve the problem would be to educate the filmmakers and allow them to apologize,” he told the Phuket Gazette.

An expat also living in the Rawai area, though concerned about the signs, agreed with Mr Esa that the community had the right to hang them.

“It is their right to show how they feel about the issue. If I was them, I would do the same thing,” she admitted.

“However, for me, the best way to make this controversy stop is to keep quiet and let the issue slowly dissolve with time. This whole situation can be compared to a fire. If we don’t put any more fuel onto it, the fire will eventually stop burning,” she said.

“I am not scared about an uprising or anything like that here in Phuket, because the Muslims here are peaceful people,” she added.

ANOTHER VIEW
Imam Aree Samard, who heads the Baan Borrae Masjid and is also the president of Phuket Muslim Relations Association, explained to the Gazette why the signs had not appeared in his community on Phuket.

“It is their right to put up the signs, but we are not doing anything like that in our area (Baan Borrae),” Imam Aree said.

“We had a meeting regarding the issue with Muslims living in other Phuket communities, and agreed that we wouldn’t do any more than we had already done,” he explained.

About a month ago, representatives of each mosque in Phuket visited the US Embassy in Bangkok to file a letter making it clear that they disagreed with the film and would like to see the US Embassy take some sort of remedial action.

“I really saw no point of doing anything else that might cause more conflict,” he added.

After hearing some of the feedback and concern about the signs, Imam Pramote told the Gazette that he now planned to discuss the tone of the translation with the Masjid’s committee and that he was considering making some changes.

“I’m against any slander against any religion. One time I saw a story in the news about a woman who was taking inappropriate pictures of a Buddha statue, and even though I am not Buddhist I was angry about it. It was wrong, and it shouldn’t have happened.

“There are all kinds of people living in our community – Buddhists, Christians, Muslims and Bhramins.

“We live together peacefully and in harmony. Each person practices what they believe in, and we always help each other for special events like weddings or funerals,” Imam Pramote added.