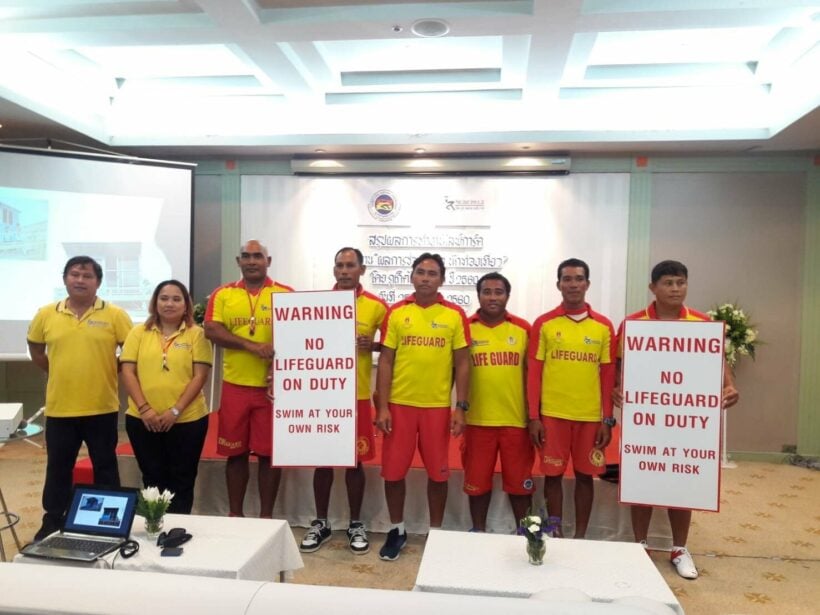 There will be no more lifeguard on Phuket beaches from the end of this month according to Phuket Lifeguard after 7 years of duty.

The meeting of the Phuket Lifeguards announced that the Company won’t be joining the auction organised by the Phuket OrBorJor this year. Their final duties finish at 6.30 pm on September 30.

“We will finish the contract with the OrBorJor at the end of this month. As we heard, the budget for contracting lifeguard services for next year is 19.8 million Baht. The auction process has started and they are accepting bidders. However, we will not join the auction as the budget is not enough to manage the whole year,” said President of Phuket Lifeguard, Prathaiyut Chuayuan.

“We have offered 22 million Baht budget to the OrBorJor which is the same amount as the year before but the budget was cut down to 19.8 million Baht which is not enough. I don’t understand why because the safety of beachgoers is important.”

He said that the company has coordinated with the local authorities to put up the signs ‘Warning No Lifeguard On Duty. Swim At Your Own Risk’ right after the lifeguards finish working this Saturday.

“I believe, after the last working day of the lifeguards, the local authorities involved must have a plan for the safety of the swimmers.”

During the meeting, the company also announced the work results of the past year.

The lifeguards from each beach explained that they had tried to save the swimmers as much as possible but there were still some of them that ignore the warning signs, flags, and rules which put them at risk. They reported that some swimmers went far on the reef and got hit by strong waves.

“During 2017, lifeguards on Phuket beaches have saved 337 people from the sea. 35 of them are Thais, 302 of them are foreigners which is less than last year when the number of people saved from the sea was 761 and 7 of them died. The lifeguards had tried to warn the beachgoers to prevent swimming accidents. However, some people do not listen and lifeguards are needed on the beaches around Phuket,” said Prathaiyut. 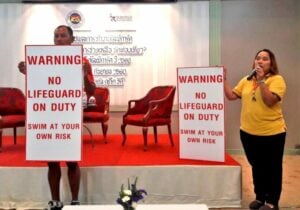