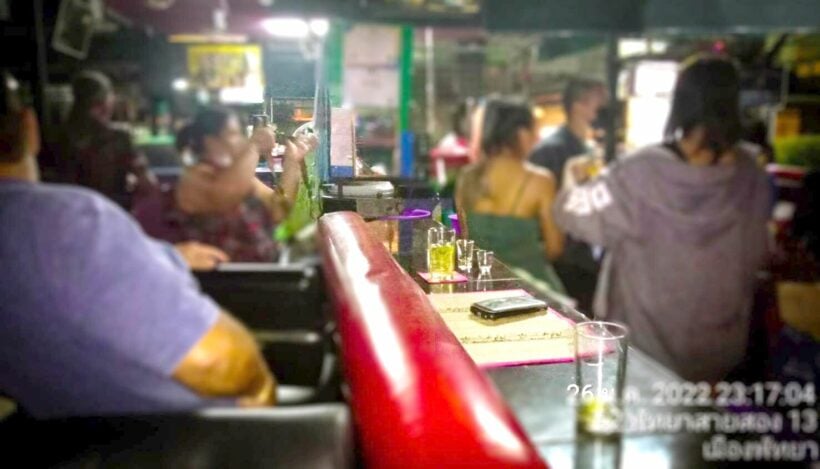 In the continuing struggle to rein in restaurants and venues violating the ever-evolving Covid-19 restrictions, police in Pattaya arrested 2 managers of so-called restaurants last night. Police reported that they were in violation of the new 11pm closing time, as well as the Covid-19 health and safety rules for venues that serve alcohol. The Pattaya City Police Chief personally led the 2 raids last night.

Last night, police arrested 2 people that were either the manager or owner of businesses that had converted to operate as restaurants. One of the venues was open completely illegally, without the licenses or certifications to be operating at all. The other was only busted for running after hours, beyond the 11pm curfew for “venues selling alcohol”.

The owners and managers will face charges of violating lawful orders, breaking the Chon Buri Disease Control Orders, and opening entertainment venues without a permit.

Police in Pattaya have been focusing on cracking down on the entertainment venues that were hastily converted to be restaurants in order to qualify under current Covid-19 restrictions and be allowed to reopen and serve alcohol. Since its inception, this has been a common loophole for bars, clubs, and similar venues to somewhat legally reopen under a thinly veiled cover as a restaurant.

Since April of last year when the third wave of Covid-19 that first seriously affected Thailand began, all nightlife and entertainment venues such as pubs, bars, nightclubs, karaoke, go-go bars, and gentlemen’s clubs have been forced to close until now. But with the allowance of restaurants that serve alcohol, many venues created a makeshift food menu and were able to reopen. The government has since increased regulation and certification on those “restaurants” saying that they at least must meet Covid-19 qualifications to reopen.

mcambl61
6 minutes ago, JohninDublin said: Ah yes. Your "goto" when you have no useful arguments. No, just when you are Blathering on with your opinions that are in no way a reflection of intellect or reality

Pinetree
2 hours ago, JohninDublin said: That really was quite funny, coming from anti-vaxxer. It was Burns' Night a couple of nights back. Can I recommend a quote from him to you: "O wad some Pow'r the giftie gie us; To see oursels…

JohninDublin
1 hour ago, mcambl61 said: What a load of virtue signaling blather. You have zero credibility or authority to decide what other people should be doing during this period. None. Is that the best you've got? Ad hominen attacks and…

JohninDublin
9 minutes ago, Pinetree said: Clearly Burns was second or even Third language English. He was a Scot, when English was becoming a more prominent second language in Scotland. Most of his poetry is in the vernacular of it's day,…

JohninDublin
1 hour ago, mcambl61 said: No, just when you are Blathering on with your opinions that are in no way a reflection of intellect or reality That's the real problem. The people who really know how to solve this problem,…